Chinese New Year is a Play ‘n GO slot that takes the popular concept of this special day and makes an entertaining slot of it! Including Wilds, Free Spins, a Bonus Game and a large number of animals this game is quite a party.

The Chinese New Year is a rather popular event that is used by a lot of different developers. Play ‘n GO decided to make their own interpretation of the concept and released it in 2014. The special take is that they don’t focus as much on the actual day, but more on the idea of the animals that are represented in different years as part of the Chinese calendar.

Because of this, all the symbols on the 5-reel, 3-row playing field are based on different animals that make up the Chinese calendar. These are drawn in a cartoony style that I liked a lot. The symbols are sharp and detailed, but only a few are animated in subtle ways without being a part of one of the 15 paylines. The background shows what seems to be a street decorated for Chinese New Year but plays no part in the rest of the game.

I did want to mention the options part of the slot, which looked very out of place and downright ugly. It’s a shame because the presentation of the rest of the game is actually quite solid. They just use some really ugly colours and strange fonts that don’t fit the general theme.

The music has some oriental tones but doesn’t really come across as a caricature of Chinese music. Instead, it just plays a calm and generic song that would fit in slots based around other themes as well.

All the symbols in the game are based on the animals in the Chinese calendar. They are all drawn by hand in the same style which I thought worked well. Most of the symbols have small animations when they’re part of a win line but only the Scatter and Wild symbols are always animated, even when only a single one shows up.

Looking at the symbols from highest to lowest, they are:

Something to note is that all high-paying symbols, up to the Snake, already pay out when there is only a two-of-a-kind on a winning payline. This helped somewhat in facilitating wins although it did not occur often in my experience. The Medium Volatility did shine through this way, as wins were rather frequent but often did not pay out enough to really compensate for a lot of spins.

Chinese New Year comes with a selection of features that aren’t terribly original but do feel like they add some character to the slot.

With 3 Monkeys on the screen, the bonus game starts. Here, we are shown a skyline of a city with 5 rockets ready to fire. The player picks a rocket which shoots fireworks over the city and grants the player a coin win. This can continue as long as the rocket doesn’t immediately explode. When it does, the bonus game is over and the player receives the total coins won.

I thought this bonus game was quick and fun but also rare. It only triggered twice during my time playing and I played for more than an hour. The max. win for this bonus game is up to 150x the total bet according to the paytable.

The Free Spins mode is the last part of the game I want to discuss. This triggered a little more often than the bonus game, even though it was still pretty rare. When it starts, the game shows a big wheel with all the different animal symbols on it. A monkey appears and turns the wheel to determine the random scatter symbol for that free spins mode.

The random scatter symbol acts as a scatter during the mode, counting as a win whenever there are 2 or more symbols on the screen. This can create big wins since a lot of times that symbol will appear stacked as well. I found the free spins mode to easily be the most rewarding part of the game.

Chinese New Year is a game that gives players something nice to look at while playing as a standard slot. The features are familiar and play out as you would expect them. There are animations and a suitable soundtrack without distracting from the core gameplay.

The slot also offers a massive max. win of 22,725x your bet but that felt like something so unlikely to happen that you shouldn’t really hope for it. Nonetheless, it might be a good incentive for players that are very driven by hitting the jackpot.

Players that enjoy innovative or classic slots probably won’t find this slot to resonate with them. The gameplay is pretty standard and the features are disruptive enough to detract from the base game. If you’re someone who enjoys a casual slot with enough features to keep it interesting, I would recommend this slot!

Browse casinos with Chinese New Year and other slots from Play'n GO. Create an account and try the game for free before making a deposit.

You can play Chinese New Year in English, Finnish, Swedish, German and 30 other languages. 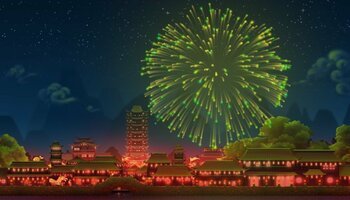