Chinese Treasures takes players to this beautiful country with its deep, rich culture and long history to find out if we are able to get our hands on some of these treasures!

The game was developed by Red Tiger and released in 2016, adding yet another Asia inspired slot to the growing list. Other examples include Double Dragons by Yggdrasil and Dragon’s Luck which was also released by Red Tiger itself. As much as I understand that China can be a rich source of inspiration, these slots do have a tendency to all blend together somewhat. There are only so many shades of red and gold, and only so many renditions of dragons and lions!

The music is nothing special unfortunately and is exactly what you’d expect from a slot set in the East. It sounds clear and has an impressive variation but it’s not creating anything new. Some of the sound effects are better, especially the dragon that sometimes shows up has an impressive size to it thanks to the rumbling roar you can hear. I also liked how the win jingles are in the correct style so they don’t take away from the mood.

Chinese Treasures uses the familiar split in symbols between high and low paying. The high-paying symbols are different kinds of golden animal statues while the low-paying symbols look like painted swirls and shapes, based on cards. The choice takes away from the theme but they were at least made to fit the setting.

Because of the large number of symbols, it is difficult to get a win which results in a High Volatility. There aren’t a lot of wins to be had while playing the base game and I found that even in the Free Spins mode it was rather difficult to get a win as well. Since Wilds have a 2x Multiplier this helps balance it somewhat but you shouldn’t expect regular wins while playing Chinese Treasures.

The features in this slot are simple but change the core gameplay in different ways. The features are:

Both during the base game as well as during the Free Spins mode the gameplay stays very basic. The only real feature that we’re going to see is the Wilds, which have a few different changes made to them.

The first is that all Wilds are multiplied, coming with a 2x multiplier. They will grant this multiplier to any win they’re a part of. The second change is that Wilds can come Stacked, filling the entire reel. I say can because I have seen single tile Wilds appear as well.

The fact that the features all act the same during any part of the game means that activating the Free Spins mode isn’t going to give the player any special benefits, other than the free spins themselves. Due to the high volatility, I didn’t find the Free Spins mode to be especially useful in getting wins, often leaving me disappointed.

While I think players that enjoy classic slots might appreciate the small number of features and the limited impact they have on the game, I think it made it too difficult to get any sizeable wins and as a result, I felt like my funds were only shrinking and never growing.

Chinese Treasures isn’t a bad slot but it is a very basic slot. The graphics are good but not groundbreaking, the music is fine but not original. Finally, the features don’t do much to liven up the gameplay, leaving a rather simple and forgettable experience.

Players can choose a bet between £0.10 and £60 per spin, which is a nice variety but I found it very unwise to bet any higher than £1 or £2 per spin. It’s up to each individual player to decide what they’re comfortable with. The max. win of 1,446x your bet feels paltry in comparison to the high volatility and doesn’t seem worth it.

I didn’t dislike my time playing Chinese Treasures but it also generated zero positive feelings towards this game either. There are slots in Red Tiger’s library that look better, play nicer and have more exciting features. Players that are looking for a classic experience with updated graphics might get more out of this though.

Browse casinos with Chinese Treasures and other slots from Red Tiger. Create an account and try the game for free before making a deposit.

You can play Chinese Treasures in English, Finnish, Swedish, German and 18 other languages. 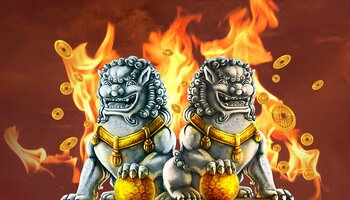