Chinese Wilds takes place in the midst of a bamboo forest, surrounded by animals that call this place their home. The game features free spins, coin wins and a random multiplier.

Released in 2017 by Red Tiger, Chinese Wilds is another slot that is set in an Asian setting. This time the focus is a little more clear as the name states that it brings us to the Chinese wilds! In this case, that means the depths of a bamboo forest, surrounded by tall trunks as we watch the 5-reel, 4-row playing field spin.

The game has 40 bet lines and a Medium Volatility, which I found to fit my experience pretty closely. The game had a tendency to trend downwards, slowly diminishing my funds over time but this was compensated slightly by bigger wins. Especially the random coin win really helped with this, considering it will be granted a random multiplier that can go up to 88x your bet.

Speaking of bet sizes, the game lets you pick one between £0.10 and £100 per spin, with my experience telling me a moderate bet is the smartest move. There can be some time between wins which will drain your funds quickly if you’re not careful.

The game looks fine. The background is very green since it’s representing a bamboo forest with some slight movement from particles floating past. The rest of the game is rather static. High-paying symbols can be animated a little bit when part of a win but other than that there is no movement in the game.

The rest of the graphics are disappointing, especially the low-paying symbols. The card letters are brightly coloured and look like they’re inflated balloons or something, not fitting with the style at all.

Chinese Wilds has seemingly no interest in changing things up. The high-paying symbols are original drawings of animals but do not offer much more than that. The low-paying symbols I thought were simply ugly and actually detrimental to the setting. The lack of any kind of animations also put me off.

From highest to lowest, the symbols in the slot are:

There is a large number of symbols in the game which make win lines harder to reach, but that is offset by the 40 bet lines and the bigger playing field. At the same time, I found the Coin Win feature to activate quite often as well. The Free Spins mode was a lot less common, but when it did appear it would trigger bigger wins too.

The game doesn’t have a lot of features and they’re pretty boring if I’m honest. The Wilds and Free Spins mode both work exactly as you would expect, with no special features or twists to the standard application whatsoever.

The only real stand-out feature here is the Coin Win even though it’s not very complicated at all. All that needs to happen is for a Win symbol to appear on the screen, which it only does on reel 3. When it shows up, the game pauses and a number of multipliers appear along the side of the screen.

These multipliers run from 2x to 88x your bet. The game randomly picks one of these multipliers, then applies it to your chosen bet amount. After that, the end-result is immediately awarded to the player before the game resumes.

It’s very simple and doesn’t offer many surprises but a flat coin win is always a nice surprise. The way it is presented is also very simple. The main downside is that it interrupts your autoplay if you have it enabled, and you will have to switch it back on.

What is there to say about Chinese Wilds that I haven’t said about most Red Tiger slots? It’s a competent slot with some interesting features, the graphics are acceptable and the game doesn’t really do anything wrong. The average player, those that don’t want the most modern slots nor the people that only play classic fruit machines, will have a nice time when playing this game.

There is not much else to say about the slot. It has its share of features which work as you’d expect them to. One time, the game will cost you more than you make and other times it’ll be the reverse. You won’t get rich with the max. win of 500x your bet but it’s unlikely to take all your funds either.

The only thing I can really say is that this slot is now a few years old and Red Tiger has begun to innovate their games since then. Where the older slots were stuck in the middle like Chinese Wilds is, their newer games are more interesting and unique. So let’s see if that trend continues!

Browse casinos with Chinese Wilds and other slots from Red Tiger. Create an account and try the game for free before making a deposit.

You can play Chinese Wilds in English, Finnish, Swedish, German and 18 other languages. 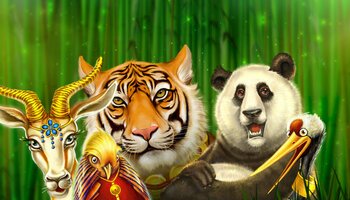