Time can hold lots of surprises. It also waits for no-one, it destroys as it creates new. There’s a time and a place for everything, and in 2019 it was time for Play ‘n GO to release their rather interesting slot game, Chronos Joker.

Chronos is, or was, the personification of time in Greek mythology. He was often portrayed as an old, wise man, and quite often got mixed up with Cronus - the mighty titan and the father of Zeus. In some paintings, he was wielding a harvesting scythe, which would later be connected with the Grim Reaper. Later on, Chronos (or Father Time) would actually become a companion of Death, which makes sense.

But, let’s get back to the slot! In Chronos Joker, time and space are presented beautifully. The game might only have three reels but, despite this, it has a whole bunch of re-spin features sure to intrigue the players. At best, the game is capable of paying up to 1,600x your bet!

The background music in Chronos Joker is fantastic synth-pop and instantly reminded me of the music of Jean-Michel Jarre. It’s an absolute joy to hear for a fan of the eighties’ sci-fi/adventure movies and I actually just ended up listening to the soundtrack after playing the game.

Next is the graphics, and yet again Play ‘n GO has done a splendid job. The background image is a view of space, with a few blinking stars and an occasional burst of stardust. The valuable symbols are the various methods the humankind measures time with, like wristwatches and sundials.

It would’ve been nice to see the less valuable symbols fit the theme, too, but in this case, they’re just your basic fruits. Other than that, the slot looks and sounds beautiful.

Chronos Joker is a simple, three-reeled slot with five paylines going from left to right. Each reel holds three symbols.

The game can randomly add x2-20 multiplier to any spin. All of the symbols can be seen both single and stacked.

As the slot can add a multiplier at any time, this paytable only presents the payouts for a normal spin. For example, if you get three Jokers on the same payline and the x20 multiplier is active, the combination pays 320x your bet.

If the spin doesn’t pay any wins BUT has the double stacks, you get a re-spin. If the Multiplier panel is active when the double stacks appear, it will start either the Spins of the Future, Present or Past. These spins have a guaranteed win.

If the Multiplier panel isn’t active, you only get one free re-spin.

Spin until you win. A non-winning spin increases the win multiplier according to the Multiplier panel. The feature ends when you get a winning spin.

Spin until you win. The multiplier stays the same through the spins.

Spin until you win. A non-winning spin decreases the win multiplier according to the Multiplier panel.

Works like the normal Spins of the Future, but the multipliers are doubled. Spin until you win.

Works like the normal Spins of the Present, but the multipliers are doubled. Spin until you win.

Works like the normal Spins of the Past, but the multipliers are doubled. Spin until you win.

Chronos Joker is an interesting slot even if it can only offer us three reels and measly five paylines. However, because Play ‘n GO has made an effort with the features, the game feels much more than it looks by the first glance. It’s a good example of how even the simplest games can bend the rules and have more going on under the surface.

Not just visually stunning, Chronos Joker has the exciting win multipliers that really up the game. Even with smaller bets, the x20 multiplier makes the wins more than acceptable. I probably would like the game more if it would have actual free spins instead of just re-spins. But, you can’t have it all - and at least some of the re-spins are with guaranteed wins.

Chronos Joker is a game which makes it easy to hit the play button on a high speed. This means the game can drain your balance so quickly that you won’t even realise it, and because of this I strongly advise to keep an eye on your losses and wins - like usual.

Of course, not all of us like their games as simple as Chronos Joker, so it’s more of a question of preferences whether you love playing Chronos Joker or not. This makes it a tad difficult to recommend it to any specific audience, but in general, I’d say give it a go. It’s fairly easy to learn and maybe a good choice for someone just beginning their journey in the world of online slots.

Browse casinos with Chronos Joker and other slots from Play'n GO. Create an account and try the game for free before making a deposit.

You can play Chronos Joker in English, Finnish, Swedish, German and 30 other languages. 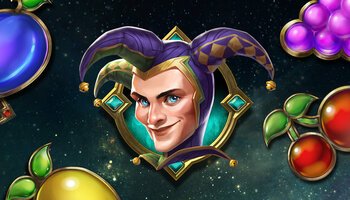