Cinderella’s Ball is an online slot that lets fans of the famous fairytale relive the story and land winning outcomes of up to 888x your bet. The heroine doesn't need a big introduction. She went against all odds to capture the prince's heart and drive to insanity her maleficent step-sisters. That lands her in the cup of most amazing fairytale characters if such a contest were ever to be held in a Grimm Brothers-themed parallel universe.

I've come a long way from the time when I ate fairy tales like The Devil With Three Golden Hairs, but these definitely have a special place in my heart for kindling a dreamer's imagination. That is why I can relate to Cinderella's story. She was a believer and she got her own online slot. I can't say that my emotions got smothered in nostalgia when I found out that a game of that title was released by Red Tiger Gaming, but I was curious to check out details.

Lo and behold, if you have no qualms about doing any manner of grownup stuff and playing a fairytale-themed slot game then Cinderella’s Ball may win your attention. I've found this to be a rather smooth-playing slot that comes with medium volatility and a fairly decent hit-rate. Landing winning outcomes is not a tall tale because the game has been furnished with five extra features and the max payout prize that I noted above isn't half bad either.

In terms of graphics and design the game has an air of uniqueness about it but this is only because Red Tiger Gaming has succeeded in mimicking a colour-book look and feel. The base game appears very basic and the symbols are steeped in simplicity, however, the extra features and reel modifiers come with intricate visual effects.

Regardless of how dreamy and tender the game appears to be, I marvelled at its moving parts such as the wild symbol's crystal shoes tapping to another location, the pages of the book turning to inaugurate a new reel modifier and the arrival of the pumpkin carriage.

Cinderella's Ball stays within the character of the fairytale theme. Those of you who don't mind switching from a slot that has a savage theme to something where pumpkins reveal cash prizes, you will find the game to be quite enjoyable.

Fairy tales abound in pleasant surprises and Cinderella's Ball can do just that with the help of several sudden and triggered events. There are two bonus symbols that can land in threes on any spin and trigger one of two bonus features.

Overall, Cinderella's Ball is all about the extra features. These are plentiful enough so that they can crop up without having to wait a long spell of turns without much going on. This is the reason why I like the game. Forget the theme and the fact that it reminds you of a children's book because the winning outcomes from the features are anything but.

I think that the payouts structure is quite alright. Perhaps the top-paying combinations of five wilds can rake-in a hefty 800x your payline stake, which is 40x your bet, however, this outcome is very rare.

I hoped that the walking wilds feature will tend to add the symbols along the path of a payline, but they eschew it masterfully so that a five matching symbol win with the wilds is nearly impossible.

Nevertheless, some decent payouts can be made even with three and four symbols. The envelope, the clock, the star and the pumpkin symbol can pay between 1x and 3x for three of a kind; between 4x and 10x for four of a kind and between 10x and 30x your bet for five of a kind.

I found the medium volatility to be a natural choice for this game because of the reel modifiers. You can expect to see a lot of winning outcomes for the cards' suits, which range between 0.2x and 3x your bet so that every now and then a pretty winning combination may be granted with or without the help of one of the features.

It is possible to try the game with 20p per spin, which is extrapolated from 1p per payline, and that’s just enough to get a feel for the rate of payouts and to see if one of the features crops up during your first 2o or 30 spins. Cinderella’s Ball has a theoretical RTP of 96.28% which is, again, quite decent and I think that the game has positive specs overall. I can recommend it to any player too.

Browse casinos with Cinderella's Ball and other slots from Red Tiger. Create an account and try the game for free before making a deposit.

You can play Cinderella's Ball in English, Finnish, Swedish, German and 18 other languages. 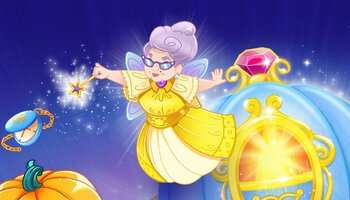