Cirque De La Fortune is a slot that gives the player a look at an old school circus where fire breathers, jugglers and mimes entertain the crowd. Meanwhile, players can enjoy a bonus game, free spins and Stacked Wilds.

The graphics of this Red Tiger slot that was released in 2020 look good, with a lot of detail and very sharp. The symbols are hand-drawn but done in a realistic way, which helps in making sure the game doesn’t come across as silly. The 6-reel, 4-row playing field also has a selection of low-paying symbols that are modelled after card suits.

When the player gets a win on one of its 30 paylines the symbols show a tiny animation and the payline itself lights up, but unfortunately that’s all that happens. The background also doesn’t offer a lot of interesting things to look at, simply showing what appears to be a starry sky. The frame surrounding the playing field gives it a fitting look though, but it’s never extravagant.

I did really like the sound design here, with the game featuring a cheering crowd and the soundtrack having a fitting style that I could see an old-school circus using. Other sound effects aren’t as interesting when compared to those details but all in all it did sound fine.

The symbols that are used in Cirque De La Fortune largely fit both the theme and the setting of the slot. Even the low-paying symbols that are card suits can be argued to fit the idea of an old-school circus. All of them look good and the characters are drawn to clearly indicate their job at the circus.

The game comes with High Volatility, which doesn’t translate in spread out wins as those were quite common, but the wins are often not high enough to make back a lot of bets. I did end up in the positives from where I started, but this depends greatly on your ability to enable some of the special features.

Players can mitigate or increase their risk by picking a bet between £0.20 and £20 per spin, while the max. win of 3,333x your bet seems acceptable for the general gameplay. I thought that the risk/reward balance was quite well done, offering regular wins in between the big wins that were triggered by the bonus features.

Speaking of features, Cirque De La Fortune has a bunch of them. During the base game, a wheel can spin that will apply a random feature. When the Free Spins mode is activated, it instead spins a Multiplier Wheel every turn.

Even though there are a number of different features associated with the Win Wheel, it almost never activates. This makes it feel quite inconsequential, which is too bad since I feel like it would have really added something to the gameplay.

The features on the Wheel include:

If you like the idea of randomly getting a special feature to activate, even if it doesn’t happen very often, Cirque De La Fortune is the slot for you. On the other hand, most of the time it will play like a normal game with very little other features. The Free Spins mode also doesn’t activate frequently enough.

At first glance, Cirque De La Fortune looks like a pretty but simple slot. The features that are included are nice but don’t really mix things up. When you see that the game features two different wheels as well as a series of special features, this makes the game look a lot more interesting.

Unfortunately, these special features and the associated wheels barely appear, making the game seem uninteresting most of the time with only Wilds as a feature. There are enough wins during the base game to give you some of your coins back, and the bonus features do appear sometimes, it’s just so rare that it doesn’t make things stand out.

The game scores points for presentation but players will probably not get the experience they want. Players that enjoy a simple slot are confronted with a bunch of rare but impactful features, while players who prefer something more complicated won’t see those often enough to feel like they are part of the game.

Browse casinos with Cirque dе la Fortune and other slots from Red Tiger. Create an account and try the game for free before making a deposit.

You can play Cirque dе la Fortune in English, Finnish, Swedish, German and 18 other languages. 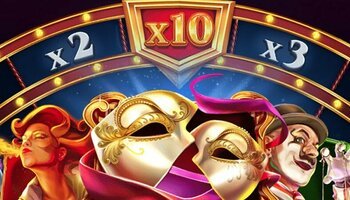