Classico stays true to its name and stays close to its roots: the classic slot experience a lot of us have grown up with. Nothing but a few reels and the appeal of a big win!

This reimagination of a classic fruit machine was released in 2017 by Booming Games, which is a relatively new name in the field. The game is called Classico with good reason as it stays incredibly close to the look and feel of the old-school fruit machines many of us grew up with.

The biggest difference is the playing field: with 5 reels and 3 rows, this is bigger than the normal 3-reel, 1-row playing field that fruit machines have. With a bigger game area, it also has 10 paylines instead of the usual 1.

I can’t really say much about the looks fo the game. There is a red square behind the different reels, the background shows what seems to be a badly rendered 3D image of a casino. The symbols themselves are sharp and colourful but obviously based on the classic slot symbols.

When it comes to the symbols there is little to comment on. The familiar symbols that are associated with fruit machines show up, only looking slightly different from the standard. The 7s come in different colours and the bell is decorated with diamonds but that’s about it.

There’s very little else to say about the symbols. When they’re part of a win there is a line to show the payline and the Wild symbol slightly moves but other than that there is barely any movement in the slot.

Classico is trying to be faithful to the fruit machine and that carries through in the features. I think the only feature you normally wouldn’t find there are the free spins. There really aren’t many features to discuss but I’ll list them for clarity:

The Stacked features in Booming Games slots always feel like a rather simple way of looking at things. There aren’t that many symbols in the game so even if this wasn’t a feature, any slot will have times where an entire reel is filled with the same symbols or Wilds. This developer always goes out of its way to mention them however, which makes me suspect they increased the likelihood of it happening.

In practicality, I found these features to do very little in helping to get a win. In my experience, not every reel had stacked symbols. Coupled with the fact that even stacked reels wouldn’t stop to have the same symbol on the entire reel made this whole feature pretty weak.

The Stacked Wilds showed up even less, although when they did show they could end up helping in getting wins more easily than the Stacked Symbols. The few times they appeared at the same time it did aid in getting bigger wins.

Speaking of bigger wins, due to the slot’s Low Volatility the coin wins are very low, even with a five-of-a-kind. Still, there were frequent wins that kept my funds relatively stable when I dropped my bet size low enough. Players can pick a bet between £0.01 and £200 per spin which gives plenty of room to choose something you’re comfortable with.

Finally, I saw the Free Spins mode activate a fair number of times. It wasn’t as frequent as in other slots but it wasn’t a rare occurrence either. With 3 Scatters you get 10 free spins which I found a fair amount.

A slot called Classico is never going to have a lot of features so don’t expect too much out of them either. They help in getting wins in several small ways but I wouldn’t say they really helped that much to make a difference.

Classico is the classic slot experience many people are looking for. There are some small innovations that include Autoplay and the ability to mute the music, but other than that it is a very standard game. The graphics are extremely rudimentary and unoriginal and there is very little to keep the eyes and ears interested.

The gameplay is fine albeit simple with the game requiring almost no input. When using Autoplay you do have to manually start the Free Spins when they are triggered. Other than that, you can sit back and relax.

Players that saw the name and wanted to know more already know if they will like this game. The players that prefer something even a little more modern won’t get anything out of this slot. The max. win of 2,000x your bet won’t pull it out of the fire for them either.

Browse casinos with Classico and other slots from Booming Games. Create an account and try the game for free before making a deposit.

You can play Classico in English, Finnish, Swedish, German and 23 other languages. 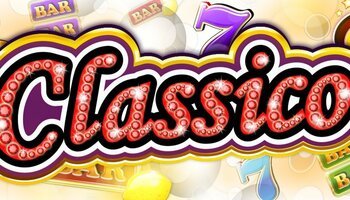