Cleopatra was the ultimate femme fatale and an intrigant of the Egyptian empire who had Ceasar wrapped around her finger. Talking about a strong, independent woman. I am sure she had many secrets that accompanied her lavish lifestyle, which is why she is one of the faces that graces such a large number of slot machines.

Tom Horn Gaming has chosen for its Egypt-themed slot a fitting title in Cleopatra's Secret. 3500x your bet is the maximum payout potential which is possible to gain by way of one extraordinary free spins session bonus with the help of the included win multiplier that does more than double your potential winnings.

I've played my share of Egypt-themed games and I don't find Cleopatra's Secret to be any more appealing than most of the mediocre specimens in that lot, but there are few tidbits about the game that I can appreciate and I’d given the game my interest on a number of sittings once.

The game comes with 25 selectable paylines, a 3x5 layout and medium variance and there is a potential for decent winning outcomes. The base game can become exciting thanks to a wild symbol that has a tendency to land on more than one position at what I consider to be an unusual frequency of spins. The other detail that makes Cleopatra’s Secret hold its own is the paytable and I’ll be there shortly.

Cleopatra was probably more eccentric than some of today's most controversial pop stars. Sadly, we don't get that impression from her symbol in this rendition of the Cleopatra saga. The last ruler of Egypt is portrayed as a solemn sovereign in the company of Anubis, a golden sphinx and a roaring mummy (Black Mummy, anyone, by Tom Horn?) which are some of the high-paying symbols of the game. So far, all too familiar.

So, I can't help it but be brutally crass. There is no end to the number of online slots in the Ancient Egypt setting. The greater share of the more dated releases fails to impress in terms of graphic design when you compare them to games like Ankh of Anubis by Play'n GO. But, that doesn’t mean these are not solid games of chance with finely-tuned mathematical models that can indeed throw in a surprise Pyramid bash for some players out there.

In terms of sound design, it’s the brightest part of the overall game design thanks to a rich melody that can nudge you in a mood to explore the pyramids.

At the onset of the bonus feature, you get to choose between the number of free spins and the size of the win multiplier. The schedule of options goes like this:

It’s nice that players are given this choice because you can try your hand at either option and just hope for a big win or multiple decently-sized outcomes that can become at least doubled with the help of the win multipliers.

I don't see a reason why anyone wouldn't play on all 25 paylines, but if you want to go retro and play on a single payline, or five or six, the game allows you to do that. Another way to play Cleopatra’s Secret is by fine-tuning the amount of your bet, so that you may choose to play the two-penny minimum per line across 20 paylines which can capture almost all potential winning outcomes for 40p per spin.

The greater the number of paylines the more expensive the bet becomes and in this respect, Cleopatra’s Secret is not a penny slot because the smallest payline stake is two pennies. Nevertheless, I liked the payout structure on this game and I think it’s quite appealing for a slot of medium volatility.

Between the high-paying symbols that depict elements of Ancient Egypt and the royal cards, players can expect the following:

The order of symbols that you have to go through before you can land at least 1x is rather tall, or in other words, royal cards can pay 1x or more starting with five matching symbols. If you want to take any winning outcome to the gambling table for a chance to elevate its value in a game of hit-or-miss, the game enables you to do that.

On a more positive note, there are three symbols (golden ring, pyramids and Cleopatra) that can ring-in 40x for five of a kind and 5x your bet for four of a kind. This is the only strong side of Cleopatra's Secret regarding the base game, so players need to be prepared to withstand a sandstorm of small payouts before reaching the bonus feature.

The bottom-line of Tom Horn Gaming’s Cleopatra’s Secret is that it is a decent game that can pay some interesting amounts in the free spins bonus game, otherwise, it plays like any of the Ancient Egypt-themed games that most slot players have already seen.

Browse casinos with Cleopatra’s Secret and other slots from Tom Horn Gaming. Create an account and try the game for free before making a deposit.

You can play Cleopatra’s Secret in English, Finnish, Swedish, German and 22 other languages. 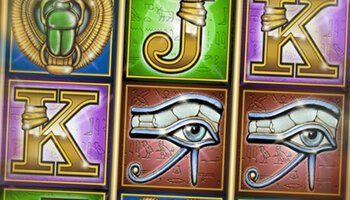