Codex of Fortune is a mysterious slot that connects the usual reels with a special mechanic. This codex is a puzzle box that will only slowly reveal its secrets to the players. These secrets include re-spins, a wheel of fortune and free spins.

The game was developed by NetEnt and released in 2021, giving the developer the chance to show off where they are these days. Unfortunately, the studio has decided to stop putting as much attention in the presentation of their slots. Not to say that this game looks bad, but there are no sprawling backgrounds and no intricate animations either. This makes the 5-reel, 3-row playing field somewhat boring to look at.

There are a total of 40 paylines on which players can get a win. When doing so, the game will light up the winning bet line and the symbols that are part of the win. Some of the symbols are animated, but it’s not much more than a simple pulse where the symbol briefly lights up and gets a bit bigger.

The theme of the slot is hard to describe. Many of the symbols are different animals represented as if they are made of precious metals. The codex on the left of the screen also has no distinctive features. It’s clearly meant to relate to some older culture but there isn’t enough to go on to say which one.

Codex of Fortune makes use of some interesting symbols that are well-made but don’t really have any kind of narrative to them. In other words, they look pretty but I didn’t feel like they fit any particular theme. Maybe they are based on classic types of art that I just don’t recognize.

The high-paying symbols are different animals represented in gold or other precious metals. The low-paying symbols, meanwhile, are just card letters. They are not made to fit any theme either although they do look somewhat originally designed. I did feel it was a bit too bland to be interesting, and as I mentioned before it doesn’t seem to belong to any time period or theme.

Meanwhile, the game has High Volatility which means it’s not that easy to get a win. The slot does make the game have a winning bet line occasionally but the payouts are very low. It’s clear that the game relies heavily on both the codex and the different special features to be able to award players a bigger reward.

In the game, players can pick a bet between £0.20 and £100 per spin. There is a maximum win of 10,000x your bet which is obviously a sizeable reward, even when considering the high volatility. I just never felt like I was close to winning it.

Codex of Fortune might be a bit confusing when it comes to its setting or theme, but the features make sure that players will need some time to figure everything out even more. The game has a large set of features that will impact the gameplay in major ways.

The main goal for the player during this game is to get re-spins to activate. When this happens, the re-spin will drop away all symbols except a random one. Whenever that symbol appears on the screen it will fill a tracker on the codex. Re-spins will continue as long as that symbol keeps appearing on the screen.

When the tracker is filled it will unlock a higher reward by moving to the next ring on the codex. The more rings are unlocked, the higher the coin win will be. This can also unlock special keys, that can either be saved or discarded. Discarding them will grant you the highest coin win immediately.

Saving the key comes back when the free spins mode is activated. Then, any saved keys can be used to unlock higher reward ranges on the codex. This can be done 7 times at most, with the highest reward being the maximum jackpot.

It’s pretty complicated but I found that the paytable did a good job at explaining it. Still, I usually chose to get it awarded immediately since the free spins mode is hard to activate.

Codex of Fortune is a good example of the new direction NetEnt has chosen for itself. Where older games showed off a lot of character, with various animations and backgrounds, these newer slots are bland and simple. They look okay but they don’t make much use of animations or special creative symbols.

The gameplay is still solid and the developers clearly tried to create something interesting. I thought it did quite a good job, although you will need to dive into the mechanics to really understand them. Players that prefer to just play and go might get turned away from that.

If you’re a power player I think this slot has potential. Play for long enough to save up a series of keys that you use when the free spins mode is activated. Doing that will automatically unlock higher multipliers for your wins.

Play Codex of Fortune for free

Browse casinos with Codex of Fortune and other slots from NetEnt. Create an account and try the game for free before making a deposit.

You can play Codex of Fortune in English, Finnish, Swedish, German and 20 other languages. 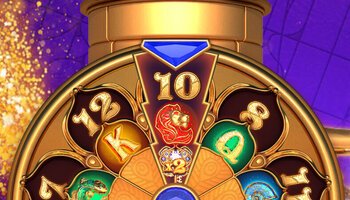