Coins of Egypt is a slot with 20 paylines and extra features that can inspire the deities of Egypt to summon a masterful gaming experience. The golden scarabs can channel wild symbols across the reels and gold coins can amass towards big win amounts rising up to 3000x your bet.

Purveyor of this game is NetEnt, a champion company that has made an amazing take on the Ancient Egypt theme. I have enjoyed every moment on Coins of Egypt, as I find its low variance to be just the setting for some amusing possibilities.

While playing the game, players are taken to a mysterious world of Idol worship and magic in the Egyptian realm. The reel-set is guarded by Osiris and Anubis, each holding a massive object of power. The reels are populated by stone relief portraits of rulers and deities, which are the high-paying symbols, while different renditions of diamond-encrusted scarabs represent the minors category.

Coins of Egypt comes with an array of visual effects that look impressive and make the game flow seamlessly. Portrait symbols wake to life and the scarabs readily take off when winning outcomes occur. Perhaps speedy players could have benefitted from the option to make the spins go even faster, but that's just me being antsy.

Coins of Egypt has a perfect base game, but with the help of the extra features, the game can take any player on an even more exciting experience. In fact, its name marks the bonus game, which is where a good deal of possibilities lie for potential big wins.

The smallest amount that you can wager on Coins on Egypt is 20p. The game has a range of low, medium and high bets that end with a stake of £1.00 per payline - that makes for a £20.00 per spin. This or any bet amount can go even higher by upping the Bet Levels between one and 10, which multiplies your bet that many times.

In terms of payouts, I was quite glad that each one of the high-paying symbols returns the bet for three of a kind. This is a rare thing to see in quite a lot of new releases nowadays, but Coins of Egypt has it and I am glad to emphasize the fact.

Winning outcomes for four high-paying symbols pay 3x, 3.5x, 4x, 6x and 7.5x your bet. Five of a kind is a rare sight, but naturally possible. This is where the payouts get a lot heftier, with the golden-winged deity paying a wholesome 75x your bet.

The scarabs can return the bet, or pay more, starting with four matching symbols, while outcomes with three of a kind underwhelm in that respect. Most valuable symbol and one that can deliver an instant jackpot-like win, is that of the golden scarab wild. Five of the same kind landing on a payline results in a win of 150x your bet.

Here is an online slot that is sure to deliver a cinematic gaming experience, along with the potential for one or few hefty payouts. I find it ingenious that NetEnt had given it low volatility and a theoretical RTP of 96.97%, because this is what makes Coins of Egypt one of the mainstays for a lot of slot players out there.

I can recommend the game to anyone who doesn’t mind low volatility payouts because the game is keen on generating a far greater number of scarab wins. On the other hand, the Pharaoh Coins feature flows throughout the entire game so those winnings can always get a good boost.

Play Coins of Egypt for free

Browse casinos with Coins of Egypt and other slots from NetEnt. Create an account and try the game for free before making a deposit.

You can play Coins of Egypt in English, Finnish, Swedish, German and 20 other languages. 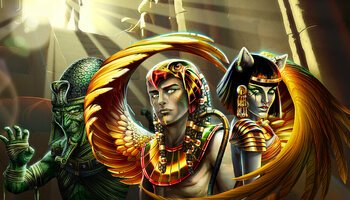