Some of the slot games out there are strange, to say the least, but there are a few good ones amongst them. I find Colin the Cat to be definitely an oddball slot, but also one that can turn out potentially generous wins.

The game is about a cat that has torn to shreds an entire apartment. Anyone who has tried to domesticate a kitten from the street will relate to the anguish of finding pieces of your curtains around the house. How this theme appeals to slots players beats me, but hey, I tried Colin The Cat and didn't find it boring nor pointless.

The game stretches back some years before Wazdan made the Magic Star series. This made it easy to spot the originating concept: there are a handful of symbols, but only four cash payouts, which is similar to the mathematical logic in Magic Stars 3.

Colin the Cat is an unruly feline; we get that from all of the symbols and the background. The theme can be appealing to anyone and the symbols were given enough labor to appear rather amusing, instead of poorly drawn and blocky renditions of a cat.

This particular cat can be found in a few poses and predicaments, but it is the belly-rub symbol that pays the biggest prize. There are a few other comparable cat-themed slots, but none seem to have this "thing" about them, not even Blueprint's Top Cat, despite all of the extra features.

The game is very plain when it comes to features, simply because there aren't any. The only notable thing that's on there is the two-way-pay system. A wild is missing but it isn't the end of the world for this game.

Wins can be achieved by landing three matching symbols on a payline. The game is set up over three rows and four reels. I think this was the other selling point for me; a standard 3x5 layout without a wild symbol would have made it a dull game.

Here the random number generator has been well-adapted to the layout. I found everything that I expected about it, including a very simple payline arrangement, where you get three horizontal and two diagonal wins on each side of the reel-set.

The symbols in Colin the Cat can be placed in three categories: low, medium and high paying. Since Colin is on each symbol, explaining the different poses he has assumed is of little use.

The crucial information in this regard is that four of these symbols pay 4x, another set of four pay 8x and there is one more symbol, a bonus lack and white Colin, that pays either 20x or 200x.

Each of the outcomes that I stated above can be won for three matching symbols, except for the game's jackpot prize of 200x.

The jackpot can trigger with any four symbols. That is correct; these don’t need to match, however, the combination has to have the black and white Colin bonus symbol attached on them. What is more, the jackpot prize is only possible on the horizontal paylines.

What gives me the slightest inkling of hope that I may ever get close to it is the fact there are three horizontal paylines out of the game's ten. That’s two-way three paylines. In my opinion this makes the odds realistic.

The range of bets is common across many games by Wazdan. Ten pennies per spin enabled me to give the game a try. Some 50 spins later, I decided to wager some more coins and up the volatility level to high.

I think there is a decent payout potential in this game. It is one of those cases when I can say patience is key, for those who are after modest payouts. If you can hold out long enough, I could see the 20x floating on the horizon.

I didn't get the 200x prize on my short stay with Colin The Cat, but I did register some not so elusive 4x wins. What I also got was a succession of six, seven and even eight non-winning spins (note the high volatility) and then the occasional block of one or two reels stacked with the same symbol, which gives the balance a good jolt.

To me at least, the only meaning of a theoretical RTP of 96.10% is that the game isn't below average, which doesn't quite mean anything because of the option to chance the volatility.

There are too many awesome slots out there, but too many have a medium-high or straight high volatility. Those who like their gaming adventures to be more down to earth, a slot like Colin The Cat is something to be considered.

Play Colin the Cat for free

Browse casinos with Colin the Cat and other slots from Wazdan. Create an account and try the game for free before making a deposit.

You can play Colin the Cat in English, German, French, Spanish and 6 other languages. 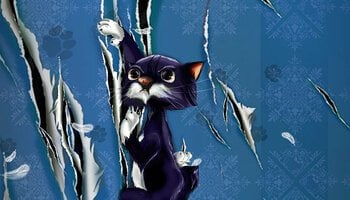