Conan, the epic warrior from the apocalyptic Hyborian Age is back! Join Conan on the reels as he bravely fights evil and helps you land winning spins.

The Conan slot game was launched by Swedish developer NetEnt back in September 2019. This followed a long anticipation after NetEnt announced its planned launch a few months earlier in the London ICE (International Casino Exhibition). With over 35,000 people at the London show and many more closely following NetEnt’s every move, Conan online slot was probably one of the most anticipated slots of 2019.

With an apocalyptic theme and an unusually-large game grid made of 6 reels and 4 rows, the Conan online slot machine offers 48 was to win and medium-to-high volatility. It also comes with Twin Reels, 3 Free Spins models and one great Thoth-Amon feature that triggers Mystery Symbols that are randomly added to the reels for more chances to win.

The sounds and visuals of the Conan online slot lure you into the dark fantasy theme, and the huge game grid that is packed with symbols throws you right into warrior action from the first spin. But did NetEnt produce a slot as epic as Conan himself? Or did they throw into this slot more features and noise than Conan’s huge shoulders can carry? Join me on a trip to the apocalyptic Hyborian Age and let’s find out!

Although many associate Conan with the 1982 fantasy film Conan the Barbarian, the brave warrior actually debuted in 1932 in a series of fantasy stories written by Robert E. Howard. The Conan stories were first published in the Weird Tales magazine, an American fantasy and horror fiction comics which is well depicted in NetEnt’s Conan slot.

NetEnt’s Conan slot machine captures the apocalyptic theme and sends you into Howard’s dark, fictional ‘Hyborian Age’ which is the setting for the sward and sorcery tales the Conan online slot portrays.

The first thing you notice when uploading the Conan slot machine on your screen are the huge reels. The large grid is set inside what looks like a temple, with large stone statues of Conan behind the reels. The backdrop of the Conan online slot depicts a snowy village. But in fairness, there’s not much room on the screen for anything else than the game grid that is larger than the usual NetEnt standard.

The soundtrack of the Conan slot couldn’t be better for this type of theme. The quiet, somber tunes create suspense, with the winds howling through the snowy village. Spinning the reels will gradually increase the suspenseful music and make you anticipate the action that is about to come. Symbols will light up on the reels with clunks of swords, fire and thunder.

With a large grid that captures nearly all of the screen, most of what you see when playing the Conan slot online are game symbols, with 24 symbol positions showing on the reels at any given time. Accordingly, the NetEnt design team managed to come up with some good symbol visuals to portray this slot’s theme.

Following are the game symbols and their payouts and functions:

When bonuses are triggered, the Conan slot machine is divided into three 2x4 sections, where every 2 reels are connected to a unique bonus feature. The following bonus features can be triggered or selected (in the case of Free Spins):

Tower Wilds (triggered on reels 1 and 2): If a Blue Tower Wild Symbol appears on reels 1 or 2 it will expand to cover the reels fully or partially. It will substitute for any other symbols except a Scatter to create more winning combinations.

Battle Wilds (triggered on reels 5 and 6): If a Red Battle Wild Symbol appears on reels 5 or 6 it will expand sideways to adjacent reels to cover up to 3 positions. It will substitute for any other symbols except a Scatter to create more winning combinations.

If the Mystery Symbol appears in combination with one or more Tower Wild or Battle Wild Symbols, it will activate the Toth-Amon feature. Where 3 to 6 Mystery Symbols are randomly added to any position on reels 2 to 5. It will only be added to a position that isn’t already covered by another special symbol.

Twin Spin: The Conan slot also features NetEnt’s Twin Spin feature which can trigger at any time during the base game. A pair of reels will light up and show identical symbols, for greater chances to land winning combinations.

Conan slot machine’s Free Spins feature is triggered with 3 or more Scatter Symbols landing on the reels. You will receive 10, 15, 25 or 50 free spins for 3, 4, 5 or 6 Scatter Symbols respectively. Once triggered, you can choose between 3 different sets of Free Spins as follows:

City of Thieves will feature the Tower Wilds that can appear anywhere and expand to cover up to a full reel.

Temple of Serpent will feature Mystery Symbols that can land and stack on any reel. When fully stacked, you will be awarded a multiplier up to 7x, and 5 or more Mystery Symbols will trigger the Toth-Amon feature.

Walls of Tarantia will feature Battle Wilds that can expand horizontally up to 3 positions.

The Conan slot is a 6x4 slot with 24 paylines. As winnings go both ways, it is technically a 48-ways-to-win slot. The minimum bet is £0.2 and the maximum £200. Conan online slot’s average RTP (Return to Player) and medium volatility means that you shouldn’t expect huge wins, but there are still good chances you won’t hit long dry spells.

The variety of bonus rounds (with up to 50 Free Spins if landing 6 Scatters) is where you can potentially generate wins, with impressive multipliers of up to 7x if Mystery Symbols stack on the reels. But still, the maximum you can win at the Conan slot is 1,008x your stake, which means up to 201,600 coins. Not the highest-paying slot we’ve seen, but not a bad winning potential for a single spin.

If you enjoyed the dramatic warrior theme of NetEnt’s Conan slot, why not try some fantasy hero slots from another leading software provider? Up-and-coming game developer Pragmatic Play has quickly established itself as a worthy rival to NetEnt. So if you liked NetEnt’s Conan slot machine, you should try Pragmatic Play’s Hercules & Pegasus. This high-volatility slot provides a high RTP of 96.5% and a maximum win of 2,000x your stake.

The Conan slot is packed with features, and the fantasy-warrior theme provides for exciting and dramatic gameplay, especially when Conan fights the snake and the Toth-Amon feature comes up. But the winning potential falls short and doesn’t meet the high expectations created by all the exciting features.

I would still recommend playing the Conan slot machine if you are into ancient battles and pseudo civilizations. But players looking for chances to win serious cash could be disappointed, and should probably look elsewhere.

Browse casinos with Conan Video Slot and other slots from NetEnt. Create an account and try the game for free before making a deposit.

You can play Conan Video Slot in English, Finnish, Swedish, German and 20 other languages. 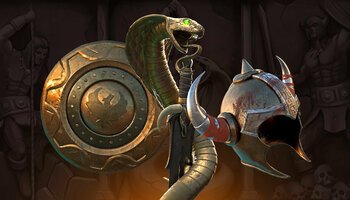