Embark on the adventure of a lifetime courtesy of software provider Net Entertainment. In this 2014-classic slot game, you will get to try your hand at snapping up one of five jackpots, wilds, scatters and three unique in-game features. Phew!

This five-reel, three-row cascading slot game comes with 15 bet lines. Your main protagonist is a big-haired space dude who has been launched into outer space to fight off aliens and win you some money.

Our prodigal hero travels through three in-game features as he fights off the alien invasion. As we have come to expect, the background music is a relaxing one without being overbearing or making the player reach for the 'mute' button.

The game symbols, on the other hand, are all space and alien-related so that you can find moons, planets, space monsters and many more on the reels.

Similar to Gonzo’s Quest from the same maker, this game benefits from the Avalanche feature. You won’t be spinning reels here.

Instead, symbols will drop down from the top in an Avalanche style. The feature also has an added advantage. Whenever you hit a winning combination, winning symbols disappear from the reels and new symbols will replace them from the top, mainly resulting in a respin.

Overall, the gameplay is very smooth, with no lag experienced. I have played this game many times over the years. Although very few casinos actually have this game in their portfolio, it still packs a punch.

Cosmic Fortune might look like a simple slot game at first, but with five jackpots up for grabs, there is a lot more to it when you scratch the surface.

The symbols are all intrinsically-designed and metallic in nature. There is also a golden ‘W’ which acts as a Wild and which substitutes for all other symbols to help create a winning combination. You can easily trigger one of the many features in the game:

Needless to say, Cosmic Fortune got me hooked from the first day it was released. Not only is it packed with features, but it is engaging enough to pull a myriad of players. The avalanche feature is a nice touch during the base game, but it’s the bonus features that keep players entertained.

In my years playing it, triggering any of the above-mentioned features was a doddle. Winning a jackpot, on the other hand, proved impossible. With an RTP of 96.9%, it doesn’t fare too badly in payout percentages.

Would I say it’s more exciting that Hall of Gods and Mega Fortune from the same maker? It’s a resounding ‘yes’. Although other slots have more or less the same features, Cosmic Fortune offers smooth gameplay.

This low to medium volatile slot game is not only visually stunning, but the creative in-bonus features, and progressive jackpots make it stick out of the crowd.

Browse casinos with Cosmic Fortune and other slots from NetEnt. Create an account and try the game for free before making a deposit.

You can play Cosmic Fortune in English, Finnish, Swedish, German and 20 other languages. 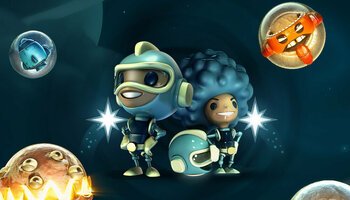 Shame that most casinos no longer feature this game. It has it all: high entertainment value and two bonus rounds. Though I never won a jackpot, I've managed to make it to the final bonus round easily.
I mostly pick casinos that feature this game these days!