Ready to join the hunt with Coywolf Cash? Embrace your wild side and join the chase in this 5-reel, 3-row slot with 50 paylines developed by Play’n GO. Go in search of Mask Scatters to trigger Wild Reels. And follow the trail to discover Totem Scatters to unlock prey Free Wilds.

This is a high octane slot with bewildering imagery which will keep your eyes peeled to the screen and a soundtrack to match. Visually, Play’n GO have managed another jewel but scratch beneath the surface and this slot will reveal a few surprises.

As usual with Play’n GO slots, the visuals are just stunning. Then there is the gorgeous animation, especially when a win with the Alpha Coywolf is recorded. There is nothing to fault here visually. Every little detail has been impeccably crafted.

That’s a lot of low-value symbols there, and this certainly impacts the gameplay. After all, this is a game that has a very low RTP of 94.3% - 96.31% (depending on what the provider sets this as). You will need the stacked wilds to make up for this. Admittedly, these aren’t too hard to come by. But unless the Mask Scatter makes an appearance, there’s little chance to have huge wins from the base game.

Keep your eyes focused on the third reel because this is where most of the action is going to come from. If the Mask Scatter appears in the base game, it will trigger the Wild Reel for a spin. Here, up to 3 stacked Alpha Coywolf Wilds can appear anywhere on the reels.

The free spins round in triggered when 3 or more Totem Scatters appear on the reels. Three scatters award 8 spins, 4 will award 11 and 5 will award 15 free spins. During the Prey Free Spins, the Mask Scatter will behave slightly differently and activate the Wild Reel’s second tier.

During Prey Free Spins, whenever the Mask Scatter Activates it will spin as it does in the base game. The difference is that all 5 columns are full. Here, 4 Alpha Coywolf Wilds and a Mask Scatter may land on the reels. If a Mask Scatter appears on the reel then the Wild Reel will upgrade to the second tier. It is here that the Coy Wolves come with multipliers (x2, x4 and x7) and Totem Scatters will award +2 or +4 spins.

Coywolf Cash adds to the list of the many wolf-themed slots available out there. And whilst this is aesthetically gorgeous with some interesting features it still doesn’t come close to my all-time favourite: Wolf Riches.

Even with its high volatility, it took me so long to get into the bonus round and when I did it was an utter disappointment. I got my 7 spins but I didn’t have the Wild Reel activate once and I got a win of 6x. After that I managed the bonus round once more, I did activate the Wild Reel this time but to my dismay, I didn’t get a win from that spin. I ended up leaving the bonus round with a measly 3x win. To be completely honest I did manage a 61x win from a bonus round but that was followed by a win of 0.9x!

I don’t mind highly volatile slots but this was brutal. I was getting better wins with the Wild Reels on the base game (around 8x) than I did the bonus round. At times, I had half the reels covered in wilds and the win would be less than the bet amount. And I understand that this is the way of slots, but in my experience, this game just didn’t deliver the entertainment I was looking for.

Other players may have a better time than I did with it. When I started playing I also fell in love with the sounds and graphics, but after quite a bit of gameplay, it left me with a bad taste in my mouth. Long story short, the only thing coy in this game are the wins.

Browse casinos with Coywolf Cash and other slots from Play'n GO. Create an account and try the game for free before making a deposit.

You can play Coywolf Cash in English, Finnish, Swedish, German and 30 other languages. 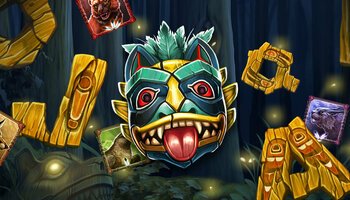