The genie from the lamp - always cool, always in a great mood, so why not call him Crazy Genie? This is the name of a Red Tiger slot that comes with multiple bonus features and has a payout potential of a little bit more than 1,000x your bet.

There is nothing unusual about the reel set as it comes with three rows and five reels, but the volatility and the hit rate are another story, because Red Tiger has enabled medium to high for the former and medium for the latter specification.

In terms of gameplay in the base game, Crazy Genie plays like most average online slots. The 3x5 reel set and 20 paylines are quite standard and I couldn't really find anything spectacular about the payouts.

On the other hand, the game is full of extra features just like the lamp is full of the genie. In addition to the wheel of fortune bonus, from where you can get one of five features, the game comes with a random feature that can grant an instant cash prize.

Surely enough, there are potential payouts to be made and in that regard, playing Crazy Genie isn't such a crazy idea after all.

Design-wise the game reflects the colour and pep of an oriental bazaar and the reel set represents a tent where all of the goodies, that is - symbols, are located. The genie is a spunky blue thing with a positive grin on his face.

If you decide to play Crazy Genie you are going to see him often because he is the guy who announces the extra features and who does the tornado spin in front of the reel set for a windfall of golden coins.

If you've played at least a couple of slots with a similar theme you may notice that the symbols are typical but have been conceived and executed with a humorous twist.

The bonus symbol, for example, has the genie peering and smiling from underneath the lid, the king cobra has a pet-like appearance and is wearing a turban and the wild symbol portrays the genie as a croupier, again, smiling for the world to see.

All of this makes Crazy Genie a game with a cheerful air about it that I think even the most hard-skinned people may come to like.

Plenty of features on this game, but sadly, they can't all be triggered by will. In order to get to play either one of these, you have to get three magic lamp symbols on the middle three reels. Then you can watch the genie spin the wheel of fortune which has five unequally measured surfaces for their respective bonus feature.

You can tell which feature is more lucrative than the other by weighing out its area of occupancy on the wheel. The Gold and Gift features have the smallest chance of getting triggered and Treasure is somewhere between these and the Lamp and Oasis fields in terms of size.

In my experience with the Crazy Genie, there were a lot of close calls for the bonus wheel to trigger. You'll get to see one or two bonus symbols land frequently on either of the three middle reels and that's close, but no cigar.

One time I had the genie turning up on the side of the reels to add a bonus symbol that helped me to get to the wheel of fortune. It's a nice touch of sheer luck, as is the random instant win even where the genie spins like a tornado across the reel set.

The base game is fun to play but the potential payouts are no match for what can shake out from either of the extra features. So I think that is the reason why none of the symbols can pay more than 300x your payline bet.

Bottom to top, the card symbols can pay only between 2x and 6x your payline bet for three matching symbols and just slightly better for four of a kind - between 8x and 24x. Five-card symbols of the same kind can at least pay back your bet or more, because the payouts range between 30x and 80x.

The high-paying symbols consist of the genie's "Like" hand gesture, the flying carpet, the king cobra and the sabre sunken in gold coins. Payouts range between 10x your payline bet, which is, again, meagre, and up to 300x which is more like it.

This is where I am divided about the game. You can land small to medium wins, at best, during the base game but in order to feel the thrill of this high variance slot, you have to make it to the bonus feature.

Overall, I like the gameplay on Crazy Genie and I like the features even more. As it may be clear from my review of the game, Red Tiger has made it all about the extra features. There are five features that require three Bonus symbols and two random features that can either land you a guaranteed win or trigger the bonus.

Nevertheless, I recommend the game because it is fun to play and because of its light-hearted nature. Those of you who want to try Crazy Genie, better wait for at least one bonus feature and see where it can go from there.

Browse casinos with Crazy Genie and other slots from Red Tiger. Create an account and try the game for free before making a deposit.

You can play Crazy Genie in English, Finnish, Swedish, German and 18 other languages. 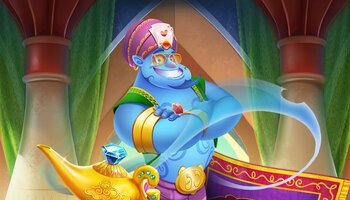