Play Creature From the Black Lagoon

Creature From the Black Lagoon makes its return in a slot form! Carrying the same name as the famous cult classic film, this NetEnt adaptation from 2013 takes us back to the mysterious waters and to meet its horrendous occupant.

Before diving in, I want to emphasise how well this slot breathes new life into the classic horror movie. Released in 1954, the Creature From the Black Lagoon was an instant hit with the audience. The black-and-white film was also shot in 3D, which was all the rage back then as it is now, but sadly most of the viewers saw the movie flat. The slot is mainly in colour, but the cinematic cuts are all in b/w.

The story in both movie and the slot are the same; a group of researchers have arrived at the Black Lagoon, in search of a mysterious life-form. They encounter a man-like creature, covered in scales and able to breathe underwater. The Creature falls in love with the girlfriend of Dr. David and takes her to its watery home. Of course, this won’t stand, and the Creature is finally killed and Kay gets rescued.

Now you can experience the exciting classic and see if you can catch the Gill-man!

I think NetEnt couldn’t have done a better job with Creature From the Black Lagoon. The slot looks beautiful and the art imitates the style of painted movie posters. But the sounds and music are even better!

I absolutely love, love, love the background music. It’s peaceful, playful and it’s clearly composed to fit the theme. I thought that I really wouldn’t be surprised if someone would tell me that the music was extracted straight from the movie. And guess what? Apparently, it is! There are also crickets chirping, and exotic-sounding birds singing. Honestly, I could listen to this for hours.

But that’s not all. Every now and then, when the player hits a winning spin, the game plays an actual line from the movie. I could hear the members of the crew, wondering the strength of the Creature, and what could be learned from it.

The game has a few short cinematic clips, which are exquisite. The only thing I’d wish they had done better is the animation on the Gill-man during the free spins.

Creature From the Black Lagoon is a pretty basic slot game, with five reels, three rows and 20 paylines. The bets and the winnings are presented as coins. The minimum bet for a single payline is one, which makes the minimum wager 20 coins per spin.

You can adjust the value of a coin by using the buttons below the reels, from the amount of coins to the value of them in cash. The minimum bet for a spin is 20p, the maximum bet varies between casinos.

Every time a Wild lands on the reels, the player gets an extra spin and also gets to keep the Wild(s) on where they landed. Each spin that carries one or more new Wilds will start a new extra spin, with all the Wilds from previous consecutive spins.

The expanding Wilds can only be activated through the Free spins. During the Free spins, it’s possible to make the Wilds “evolve” from one Wild to a Wild that will expand by one to the adjacent reel. The last form of the Wild is the kind that expands from one place to both of its sides, covering three adjacent symbols.

The expanding Wilds are also sticky, like in the base game.

For three Scatters you receive 10 free spins. If you get four Scatters, it’s worth 15 spins, and with five Scatters the game grants you 20 free spins. It is possible to win 10 more spins, but only if you manage to hit the Gill-man nine times with your harpoon!

The health meter under the reels indicates the health of the Creature. It has 9 steps, which are divided into three sections. Collecting the target marks on the fifth reel drains the health meter, and the sticky Wilds evolve to the expanding Wilds on the second and third section.

If, and when, the health meter is drained, the Creature is killed and you’ll receive 10 new free rounds with the sticky, expanding Wilds.

Creature From the Black Lagoon was already a familiar slot to me since for me it’s one of my favourite go-to games from NetEnt. It has it all; nice graphics, beautiful music, entertaining features and the theme of the classic horror movie.

Most of the time the slot is a bit greedy, which isn’t a surprise, as it is a high volatile game. Like with most slots, the biggest winnings are lurking in the depths of the free spins.

Creature From the Black Lagoon might not smell quite as fresh as on the day it was originally released. However, it doesn’t feel like an old slot, either. NetEnt succeeded in making this game nearly timeless, only the smoothness and a general lack of tiny details in the cinematic cuts give away the age.

For myself, I haven’t yet grown tired of hunting the Creature, and I doubt I will. Besides, there’s still two sequels for the movie, Revenge of The Creature and The Creature Walks Among Us. Only the time will tell if NetEnt decides to use them for new games.

The water’s fine, so jump in if you dare!

Play Creature From the Black Lagoon for free

Browse casinos with Creature From the Black Lagoon and other slots from NetEnt. Create an account and try the game for free before making a deposit.

You can play Creature From the Black Lagoon in English, Finnish, Swedish, German and 20 other languages.

Creature From the Black Lagoon supports GBP, EUR, SEK, NOK and 33 other currencies. 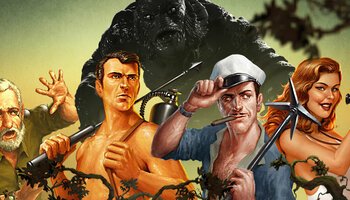