Crystal Prince follows the life of the titular prince, a young man seemingly in control of ice and crystals as he ventures deep into the snowy mountains. Players that are brave enough to follow him will encounter Free Spins, Expanding Reels and Multiplier Wilds.

This 2020 slot was released by developer Quickspin who built a 6-reel, 4-row playing field set inside the ice cave on the side of a mountain. There seems to be a bit of confusion between what crystal means, as the symbols include both actual crystals and ice crystals. There isn’t a lot of movement on the screen apart from the falling symbols but considering the cascading reels, this already gives quite a lot of things that catch the eye.

The symbols are simple but that makes sense considering the maximum size of the playing field, which can go up as high as 8 reels. The use of colours and shapes makes them stay easily distinguishable with a quick glance. Overall, the theme of the game is kept well, with no card letters or other generic symbols that don’t make sense. Because of the changing size, the game has between 4,096 and 262,144 bet lines.

Crystal Prince is made to look rather simple in appearance, with the images looking sharp and clear but not being particularly detailed. I don’t think that’s a bad thing as it keeps things clear and your eye will instantly be able to see any wins. This also helps when the reels cascade and another row is added, filling the screen with dozens of symbols at a time.

The game offers very low payouts for even the longest win lines. This is the reason why it is listed as High Volatility, but it is definitely possible to get bigger wins. The different features in the game include expanding reels and multiplier wilds which make wins bigger and makes it more likely to get multiple wins at the same time.

There are a couple of features present in Crystal Prince that change the gameplay in numerous ways. Most of them appear during the base game, while the free spins mode is roughly the same except with free spins.

During the base game, most of the time the game plays as normal with none of the special features activating. This doesn’t mean wins are absent and even bigger wins are possible, considering the expanding reels that can help create a number of wins at a time. Still, in my experience, it requires either the Blizzard Seal or the Free Spins to activate to have any real opportunity at getting a big win.

I found that most spins you will get some win, even if it is just one three-of-a-kind payout. This isn’t much and it won’t make back your spin, but it is still a nice occurrence. Meanwhile, hitting the Blizzard Seal means you have gotten at least 4 wins in a row and this is before the multiplier wilds are added to the screen.

Free Spins are a little more difficult to activate but they showed up often enough to be helpful. They largely operate the same way as the normal game, except the 8 rows are unlocked from the start. This means there is a bigger opportunity to get a win naturally, and this is aided by the Wilds that are present on the playing field as well.

Playing this game for several hours I found my funds to end up slightly above the starting point but it was never a resounding push upwards. Players should keep their bets in mind as there can be quite some time between wins so you shouldn’t bet more than you can lose. For this reason, the game allows you to pick a bet between £0.20 and £100 per spin.

Crystal Prince is a game that has some nice graphics without spending too much energy on making everything look highly detailed or animated. Instead, the focus was on keeping it simple and allow players to keep a clear overview.

The features operate in a similar way, not spending too much energy on creating something new or experimental but taking existing concepts and improving on them slightly. The high volatility of the game might be a turn off for some players as you will usually be required to play for quite a while to see a return on your spins if any.

In short, Crystal Prince is a slot that comfortably positions itself in the group of basic video slots with some obvious changes to the core gameplay. Most players will enjoy this game, either because it’s close to what’s familiar or because it changes those familiar things.

Browse casinos with Crystal Prince and other slots from Quickspin. Create an account and try the game for free before making a deposit.

You can play Crystal Prince in English, Finnish, Swedish, German and 23 other languages. 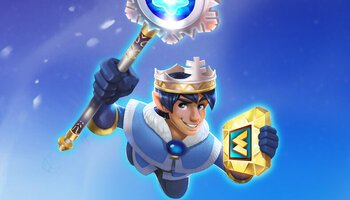