Crystal Queen brings to life an adventure in the snow as the reels spin and additional rows are added to the playing field as we look for the biggest wins!

This slot was released in 2015 by developer Quickspin as a rather standard slot with a 5-reel, 3-row playing field and 20 paylines. What elevates it to another level is the possible addition of another 3 rows and 36 more paylines, bringing the total to a 5-reel, 6-row playing field with 56 paylines!

Crystal Queen is set in a wintery forest where everything is covered in snow. The background shows us vast plains of snow-covered hills with some trees framing the screen. The reels themselves are half covered by ice until we get a win, at which point 1 row at a time melts and is added to the game.

One of the most striking aspects of the game to me was its resemblance to Disney classic Frozen. The setting is obviously not enough to make that connection, but the characters are: there is an ice queen, a red-headed girl, a rugged outdoorsman and an elk. If you have ever seen the original movie this should ring a few bells!

It’s not something that’s given a lot of emphasis but it did strike me as an obvious connection. The queen in Crystal Queen might look a bit older than Frozen’s Elsa but the resemblance is still there. There’s nothing wrong with being inspired by fiction, of course, most slots are based on something in popular culture!

The sound is rather simple when it comes to its originality. It tends to stick in the background with only a short tune when the reels spin and no real background music unless there is a win. Even then, it all stays very subdued.

Crystal Queen is made up out of high- and low-paying symbols. The high-paying symbols are different characters, each of them nicely drawn and with a lot of detail. The low-paying symbols are in pretty sharp contrast as simple high cards with little fanfare. They aren’t even drawn to give the impression of being placed in an icy forest. I found that to be quite disappointing.

Although the win values are pretty low, the listed Medium Volatility did pan out due to the different features introduced to the game which I’ll discuss next.

Crystal Queen has a few familiar but impactful features that alter the playstyle of the game quite a bit. Even though the game might resemble a classic slot at first glance, it does stray pretty far from that experience.

That’s quite a lot of features but I found them to be well-integrated into the base gameplay. Each time a win would occur the field would expand by 1 row as well as remove the winning symbols and have everything cascade. This loop would be a big part of my time playing and I would get some moderate wins this way.

The real challenge was getting into the free spins mode which is essentially the different features all activated at the same time. Not only are all 6 rows unlocked immediately, the paylines now count both ways, essentially doubling the 56 paylines. The only thing that isn’t immediately activated is the multipliers, which still only go up with consecutive wins.

I regularly found myself with increasing funds, even though I can’t guarantee that will always happen of course. The medium volatility made it interesting to pick a higher bet between the £0.10 and £100 per spin since the free spins mode would often make up for my losses. The only slightly disappointing part is that the max. win is 1,400x your bet. This is certainly not bad, but not as high as some other slots offer.

Crystal Queen seems very simple and light on features but even though it is basic, it’s not light on features. They are just a great addition to the base gameplay and feel like a connected part of the game in my opinion.

Crystal Queen might have taken some inspiration from a popular children’s movie but in turn, made the different aspects their own. As much as I enjoyed the graphics of the game I mostly focused on the features that offered me a great time playing this game.

Obviously, your mileage may vary and I can’t make any promises. Even so, the different features work well together and are interesting to watch. The constant thrill of the cascading reels made it so that even a mediocre first win could turn into something a lot bigger, sometimes even triggering the free spins mode in the end!

If you’re a fan of pretty but static looking games with plenty of features I would recommend Crystal Queen. Players that favour a more toned-down and classic experience might be wise to keep looking.

Browse casinos with Crystal Queen and other slots from Quickspin. Create an account and try the game for free before making a deposit.

You can play Crystal Queen in English, Finnish, Swedish, Russian and 4 other languages. 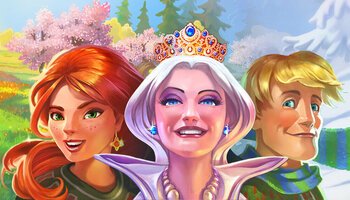