The gods of old are watching as you gather the treasures of the Nile. Cygnus is an innovative game with a strange design.

ELK Studios is known for their beautiful and groundbreaking slots. This is very obvious if you look at Cygnus, a slot released at the end of December 2019. Cygnus breaks the mould by reimagining how a slot can be done.

Here, it’s not about how many special symbols you get or if they are on a payline. In Cygnus, you need to keep the symbols moving and get them to touch certain parts of the playfield. It sounds complicated, but it’s actually very intuitive.

Cygnus is a wild game in its design and its wins. This slot is for those players, who want some action in their lives.

You might wonder what the Cygnus constellation, or Northern Cross, has to do with ancient Egypt. Some people believe that the Pyramids of Giza, which are depicted in this slot, are built to match the location of the wings of the swan.

You are standing before the Great Pyramid in ancient Egypt. The Cygnus constellation is visible and the night sky is clear. Look for the mysterious hieroglyphs, which are your key to the treasures of the gods.

Cygnus is simply a gorgeous game. It’s not really that surprising, as that is what ELK Studios does. I don’t remember if I have ever seen even a mediocre-looking slot from them.

When you start to play for the first time, the game might look a bit weird. There are no actual reels and the symbols are staggered, so it’s hard to tell what is connected to where. There is no need to worry, as the game is a lot simpler than it seems. The columns function as reels and the game has Win All Ways feature, so you don’t need to worry about paylines.

The way the slot is structured is actually pretty clever. It adds some superficial challenge but doesn’t make the game too difficult to comprehend. The slot stands out and people will remember the strange look.

The sounds are where ELK Studios cut corners. Not that the music or sound effects are bad in any way, they are just okay. The music doesn’t draw your attention at all. It suits the theme and it doesn’t bother you in any way. It’s simply okay.

The symbols in Cygnus are not exactly normal. They are spheres with hieroglyphs on them, and spheres don’t stack that well. There are seven regular symbols and three special ones.

The art on the symbols is great, except for one. The most valuable symbol looks like a poker chip, which you don’t often find in ancient Egypt. But what’s more interesting, is how they move.

The game has a Cascading Wins feature, which means that winning symbols are removed. This causes the remaining spheres to roll down diagonally to fill the empty spaces and only then new symbols are added. This can move valuable symbols closer to the left side of the screen and make them easier to win.

This is also the unconventional way the special symbols are handled. A wild is just a wild, but the X-symbol and the Cygnus bonus symbol need to be moved to a specific place to work. X will increase your multiplier if it touches the bottom and Cygnus symbol will activate the Free Spin feature if it moves to the left column.

If this wasn’t enough, there’s still the second part of the Cascading Wins feature to mention. After every cascade, the game will fill the columns back up and increase the number of symbols. Every cascade adds another row and your 24 symbols can turn to 48 after a couple of cascades.

With so many strange features and oddities, it’s not that easy to get a good win. The volatility is high and I ended up playing a lot of rounds where I didn’t get anything. On the other hand, when I won, I won big. A good chain will easily give you 10 or even 20 times your bet back, but you might need 10 or 20 spins to hit that.

In Cygnus, all paylines are from left to right, but it doesn’t matter where on a column the symbol is. Just as long as there are no gaps, you get a win.

When you win anything, the game will remove every winning symbol from the playfield. What is different here, is that the remaining symbols will first roll down diagonally until they have enough support.

After the symbols settle down, new ones will fall from above. After the first cascade, you have five rows of symbols and you keep getting a new row with every cascade. The maximum amount is eight.

Your multiplier can rise if you get the symbols to drop. The X symbol will increase your multiplier by one notch if it is touching the bottom of the screen. It doesn’t matter where it is, as long as it is the lowest symbol on that column.

You can see the possible win multipliers on the obelisk on the right side of the screen. You need six X symbols to fill it, which gets you a 64x multiplier.

The titular Cygnus symbol, or the swan, is the bonus symbol. If you can get it to touch the left obelisk, you win 7 free spins. These spins are played with the maximum 8 rows.

During the spins, your X symbols are sticky. This means your multiplier will not reset between spins. You can also get more spins if you get a new Cygnus symbol to hit the left side of the field.

Cygnus is a groundbreaking slot that tries something different. I always love to try games like this, so I can see what kind of innovations the developers are coming up with.

I love the design of the game and the interesting way it deals with the special features. The game has a lot of potential, but a tad high volatility for my taste. If you like a wild slot, then this one's for you.

One thing did bother me, and that was how difficult it seemed to activate the Free Spins feature. The bonus symbol didn’t show up often, so it was hard to then also get a good cascade going. I can see just how valuable those free spins are, so I’m not surprised that activating them isn’t easy.

What is easy to see, is just how interesting this game is. It may look a bit intimidating at first, but not that hard to learn. Just give it a go and be ready for some wild swings.

Browse casinos with Cygnus and other slots from Elk. Create an account and try the game for free before making a deposit.

You can play Cygnus in English, Finnish, Swedish, German and 18 other languages. 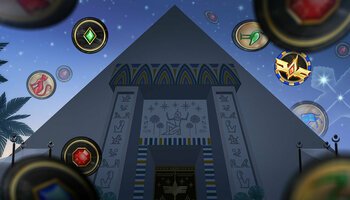