Danger Zone brings the player deep under the earth in search of gems and gold nuggets. Using dynamite to clear the way, you have to stay on your toes or you might get buried! To help players along the game also features expanding reels, free spins and random wilds.

Booming Games is the studio behind Danger Zone who released it as recently as 2020. My first impression of the game was definitely not that positive, assuming it was at least 10 years old based on the graphics alone. Everything looks grimy and dirty in a low-texture way, with the details of the symbols and the slot itself feeling very outdated. The 6-reel, 4-row playing field offers enough room for the different symbols but unfortunately, that just brings extra attention to the lack of quality.

There are 25 bet lines in this slot which are shown whenever there’s a win, also placing the total coin win on the screen. In the background, we can see the entrance of a cave with a TNT plunger next to the playing field. It’s clear through those items that we’re supposed to be digging for treasure in the shape of gold nuggets and diamonds.

Danger Zone is a new slot which means it makes use of some more modern features. These features don’t really come into play all that often though. Coupled with the larger playing field, the wide array of symbols and the medium number of paylines the game lands on High Volatility. During my time playing, I found the slot to grant small wins relatively often but anything big enough to win back several spins was extremely rare.

To deal with the volatility, it’s possible for players to adjust their bets per spin. They can choose an amount between £0.25 and £250 per spin which is obviously quite a wide range. Players should start off with a lower bet before increasing since the volatility will mean wins are rather rare. If your bets are too high, you might run out of funds before you trigger a big win. Speaking of big wins, the maximum jackpot is 2,000x your bet. This is quite low compared to other slots with the same volatility so do be aware of that.

The game features the following symbols, from most to least important:

Danger Zone is a slot that doesn’t make much use of features, but the ones that are there are relatively clever and integrated well into the gameplay. I wouldn’t say I’m absolutely in love with them but they spiced up the gameplay enough to keep it interesting.

First off, a quick look at the different features that you can find in this slot:

Most of the game will take place on the main screen where players will be watching the regular slot play out. The only things that you’ll encounter here are the Wilds and occasionally the bursting symbols.

There are two types of bursting symbols, both of them sticks of dynamite. The regular symbol will turn itself and up to 8 symbols surrounding it into a random high-paying symbol. This can turn into a big win but often when it happens on reels 3 or 4 it will not create a single winning payline.

Much more useful is the Bursting Wild, which is the stick of dynamite with a Wild on it. This will turn all surrounding symbols into Wilds and makes it a lot more likely that it will trigger a win. Looking at the payouts for regular wins I can be pretty certain that the game expects this to happen in order to create any big wins.

Finally, there is the free spins mode. This mode is triggered by getting 3 scatter symbols on the screen at the same time. Once this happens, players receive 8 free spins. During the free spins mode, I didn’t find anything to function differently from the base game.

Danger Zone is a slot that honestly looks quite terrible. The graphics are outdated even if the slot was 10 years old, but it’s not. The design is very simple, there is no real reason why it looks so poor and it honestly puts me off from playing it.

The gameplay itself can be described as simple and rudimentary. The Booming Symbols mechanic is quite interesting but it didn’t trigger very often, it frequently didn’t turn more than 2 or 3 symbols into another symbol if it happened on a suitable spot at all. In summary, even when it appeared its influence was minimal.

I think there will be a group of people that enjoy this slot, as it harkens back to a simpler time where slots still struggled with their appearance. Simultaneously, it doesn’t really justify why it looks or plays this way, which will make it difficult for most people to connect with.

Browse casinos with Danger Zone and other slots from Booming Games. Create an account and try the game for free before making a deposit.

You can play Danger Zone in English, Finnish, Swedish, German and 23 other languages. 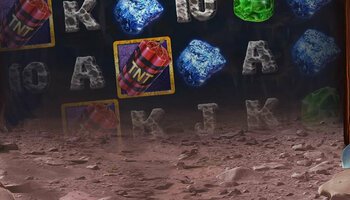