Open the Dark Vortex, and step inside to the interdimensional netherworld! But beware, you’re not wandering there alone…

This slot by Yggdrasil completely blew me away. It’s dark, it’s beautiful and, let’s not forget, a highly volatile game with a nice RTP of 97%. But that’s not all, it also has 243 paylines, you get wins from both ways, and there are demons, and monsters, and monster dogs! I mean, come on, who wouldn’t want a monstrous dog as their friend?

Dark Vortex was released in 2018 and it’s, putting it simply, a really well-done slot in almost every aspect. I’ll explain this later in the review, but generally speaking, I can’t remember the last time I was this hyped by a slot game.

So, let’s get down with the story, first. You are standing before an ancient altar, that has been activated by evil forces settled in another dimension. You have heard that their realm is full of riches - so naturally, you try to break in! All you need is at least two cursed relics to crack the door open.

The game opens with a dark night at a place that at first glance looks like a cemetery. But, as the camera pans back, we can see a mysterious altar. It’s illuminated by candles, and the only source of light in addition to them is the waxy moon.

Soon the candles are blown out, and the centre of the stone altar is sucked inside a dark vortex (hence the slot name!). And behind the altar, with bolts of lightning colouring the sky pink, rises a gigantic monster with tentacles. This would all get quite scary with the ominous music, but then the monster breaks in comical laughter that doesn’t, in any way, fit to the fangy mouth.

Yggdrasil has a good reason for standing proud; the graphics of Dark Vortex are stunning. Okay, I admit that I love just about anything with a horror-like theme, but even if that wasn’t the case I’d praise this slot for its beauty.

The music goes nicely with the graphics. It’s atmospheric, fun to listen as it is, and the additional sound effects are done well.

Dark Vortex, in its basic mode, has five reels, three rows and 243 paylines. With the cursed Vortex symbols, the reels are opened into the vortex, and more paylines get added to the game. The number of paylines can go up to 3,125.

The slot pays for the same symbols on three adjacent reels from both ways unless there’s 5 of a kind wins, which are paid from the left only.

When you get at least two cursed relic symbols, or Vortex symbols, on anywhere in adjacent reels, the reels become Vortex reels. At times like these, the stone slabs behind the symbols are sucked inside the vortex and the game gets additional 432 paylines.

When activated the Vortex spins transform the reels where the cursed relics landed. Instead of three symbols, the reels now carry five, and with the change, more paylines get added.

Notice, that the Vortex spins are not free spins. You still need to pay the bet to spin the reels during the Vortex spins. If you manage to collect a new cursed relic to an adjacent reel of the current Vortex reels, you’ll get two more Vortex spins and even more paylines.

If the Vortex spins run out before you get to collect five cursed relics, the game returns to its original state on the next spin.

The free spins are your passport to the dimension of monsters! The free spins can only be acquired by opening the portal, which means collecting all five cursed relics.

Dark Vortex gives you the option of buying the free spins, instead of trying to activate them naturally. The price of the feature is 80x your bet. If you choose this, the next steps are randomly selecting a card for the stacked wilds and the number of free spins.

As I tried buying the feature couple of times, I noticed that the cards carried different numbers on them each time. At the first time I had the chance of winning from 7 to 15 spins, and next time the cards showed possibilities from 5 to 20. The same goes to the cards selecting the height of the stacked wilds.

So in short, each time you buy the feature, you’ll get offered slightly different possibilities for the number of free spins and the wilds.

Note, that UK Gambling Commission has banned the Buy bonus feature, effective from October 2019. Because of the ban, either the feature or the whole slot might be unavailable, and this concerns all the slots with the feature.

I thoroughly enjoyed playing Dark Vortex, as well as its versatility and how it looks and sounds. The theme of the slot was a perfect fit for me, as I do love everything related to horror and fantasy. But, even with a theme as heavy as this, the slot is far from being too serious.

I do recall the first time I tried Dark Vortex. At the time I felt the game a bit too complex, so the slot might not be for everyone - least for those looking for simple fun. However, the players with more experience could pretty much just jump in and learn the game as it goes.

Since the first time I opened Dark Vortex, I have had the pleasure to get to know Yggdrasil and their style way better. So it was noticeably easier to learn the features and the logic behind them.

The only thing I didn’t like that much was the unpredictability of the free spins feature when buying it. The system of picking a card alone would be okay, but for them to carry different amounts every time is a bit too much.

To sum it all up, I love Dark Vortex. It does have some minor flaws, like the randomly given chances of spins and wilds when buying the feature. But, that’s about it for the cons. The design of the slot is gorgeous and the gameplay is fun, although some players probably will need some time to study it first.

I would gladly get immersed in the dark vortex again.

Browse casinos with Dark Vortex and other slots from Yggdrasil. Create an account and try the game for free before making a deposit.

You can play Dark Vortex in English, Finnish, Swedish, German and 18 other languages. 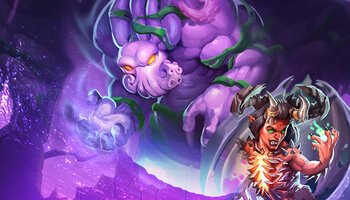