Das xBoot is the adaptation of the famous German film released in 1981 about life aboard a U-boat during World War 2. This slot not only uses the visuals and characters from the film but also adds a non-standard playing field, expanding reels and free spins to the experience.

The game has a distinct art style that I have come to associate with its developer Nolimit City, who have released several games in 2021 with a similar look. The setting and theme are completely original though, which I appreciate. The game is played on a non-standard playing field with 6 reels in ascending and then descending size. Reels 1 and 6 are 2 rows, reels 2 and 5 are 3 rows and the middle reels are 4 rows each.

During the base game, the slot has 576 paylines but this can grow into 75,712 ways to win as the game does feature expanding reels. This has to be unlocked first by triggering the free spins mode. Some countries allow the player to activate this bonus mode manually but this is not possible for UK players.

When it comes to its presentation, I thought this slot does a great job. The game looks gritty, with the portrays of the crew showing them looking distressed or panicked. In the background, we can see part of the U-boat itself deep below the waves. There are also some subtle animations, like the radar screen spinning.

Das xBoot doesn’t go out of its way to introduce a lot of original symbols. Although the high-paying symbols are new and designed specifically for this slot, this is common across most slots. The low-paying symbols meanwhile are simple card letters, another thing we often see in other games. It does kind of detract from the setting and the theme, especially since such care was taken to make it look appropriate.

Players are looking at a slot with High Volatility if they decide to give it a try. Its non-standard playing field makes it harder to get a win and the payouts aren’t very high. I found the best way to get a bigger win was to trigger the free spins mode. Unfortunately, that was rare. The game has an RTP of 96.03% which is a hair above average.

If we’re looking at the options for players, one of them is to augment their bets. Players can pick a bet between £0.25 and £100 per spin. There is also a maximum win. In this case, the jackpot is 55,200x your bet. A very big win, even when compared to other slots with the same volatility. However, the circumstances that allow someone to walk away with this prize are difficult to attain.

The symbols you’ll encounter in this slot are:

Das xBoot seems rather simple at first but has some interesting features that change up the gameplay. As such, I don’t think it’ll be a great fit for players that only prefer classic slots.

I don’t know if it was intentional but a large number of features and mechanics on a smaller playing field makes the slot feel very cluttered. This reminds me of the movie and the way the U-boat is portrayed. As such it could be a very clever way of showing the player what the environment was inside the submarine.

Either way, players will have to get used to a number of different features. I thought they were largely quite entertaining but not very impactful on the game. Only the Wolf Pack free spins mode offered me any big wins, but that was exceptionally hard to trigger. As a result, I noticed a steep decline in my funds as I played.

Das xBoot brings players deep underwater to experience something most of us will never have to live through. The presentation of the game is excellent, with beautiful graphics and a style that makes it feel pretty authentic. There are a lot of small details in the slot to make it very interesting to pay attention to.

The gameplay will likely only appeal to players that are looking for a more modern slot with innovations and newer features. None of them is truly unique but their combination makes it feel more original. I would recommend checking out the paytable to see how everything works. I didn’t think that the game itself explains it properly while you’re playing.

For big rollers, the massive jackpot will likely be a huge incentive to try this game. Even though it won’t be easy to get your hands on it, the possibility still exists. Even if you don’t manage it, I do believe players that enjoy complicated slots with lots of features will get a kick out of this game. If you’re into submarines, you should also try this slot.

Browse casinos with Das xBoot and other slots from Nolimit City. Create an account and try the game for free before making a deposit.

You can play Das xBoot in English, Finnish, Swedish, German and 12 other languages. 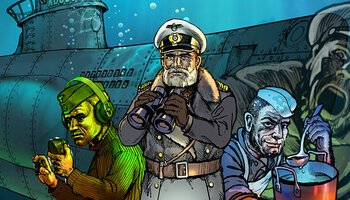