Shiny gems sparkle and shine in NetEnt’s 2015 slot Dazzle Me. This game, pretty and delicious as candy, is full of colourful jewels that can link together to bring you some hefty riches.

In 2015 NetEnt published some pretty imaginative slots. Of those, especially Dazzle Me, Pyramid and Spinata Grande aimed to break the limits of traditional games by adding or stretching the reels. In result, Dazzle Me has different-sized reels and a generous 76 paylines, creating an interesting play area. Later on, this layout would be used later in 2016 with the slot Motörhead.

Unlike many other modern-day slots, Dazzle Me doesn’t have a story. It’s just a glittering and nice-looking slot with gemstones and a few features, including free spins. So it’s fairly easy to learn and play, and as a low-volatile game, it’s not too harsh on beginners, either.

Dazzle Me looks great, there’s no denying it. It’s sleek, glittery and… Well, dazzling. The theme of the game revolves around gems and luxury, so it’s only natural that the game looks and feels rich, both in colour and shine.

The music fits the game nicely and as the loop isn’t too short, it’s pleasant to listen while spinning the reels. But it’s also very mediocre and just as easy to forget - which, sadly, is the feeling I have with the game in general.

Dazzle Me is a slot game with five reels and 76 paylines. The reels are mismatched, the first two having three rows, the next two having four rows and the final reel being 5 rows tall. The paylines go as in traditional slot, from left to right, starting from the first reel.

The game has a randomly activating feature that can change 1 to 5 reels full of Wilds. With three or more Scatters you win free spins.

The feature triggers with the logo of the game glowing and the diamond in the middle of it having a spin. Annoyingly, this visual effect can also happen without any Wilds appearing.

Three Scatters triggers 8 free spins. With four symbols you win 12 spins, and 5 symbols get you 16 free spins. The free spins can not be retriggered.

If you have ever played Twin Spin, a term linked reels should be a familiar one. In Dazzle Me the linked reels can only occur during free spins, and this is how they work:

Dazzle Me is a slot I could recommend to a newbie, or to someone not wanting to take big risks. It has low volatility, meaning it’s not likely to experience any thrilling ups and downs, but instead a bit steadier wins and losses. The RTP could be a bit better.

While playing Dazzle Me, I noticed that it’s much harder to get any decent wins with bigger bets than with small wagers. With £10 bet, I entered the free spins and won £62. A whopping 6.2x my bet - didn’t quite get me jumping. Later on, I used £1 bet and won around the same sum.

One thing I also don’t like is the teasing with the features. I don’t think I had ever experienced that before Dazzle Me - the moment when you see a feature being triggered, and then it just stops without anything happening. This really gets me to grind my teeth and rather than wanting to play more, it makes me want to switch games.

In a nutshell, Dazzle Me can be a fun slot, but it does have some less fun qualities which can easily have a tiresome effect on the experience.

Play Dazzle Me for free

Browse casinos with Dazzle Me and other slots from NetEnt. Create an account and try the game for free before making a deposit.

You can play Dazzle Me in English, Finnish, Swedish, German and 20 other languages.

Dazzle Me supports GBP, EUR, SEK, NOK and 33 other currencies. 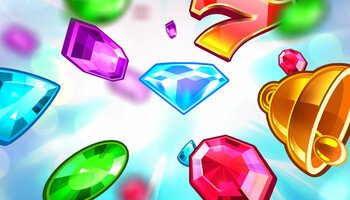