Devil’s Number plays with the terrifying Number of the Beast to see if we can coax some big wins out of the netherworld without getting dragged down ourselves!

It’s immediately clear to those that start this slot that the Red Tiger Gaming slot from 2019 is not for the faint of heart. The game’s logo has 666 on the horned skull that adorns the title and there is plenty of art in the game that evokes a demonic atmosphere. I wouldn’t call the game scary though, most of the images are books and pots, next to the usual card suits. If you’re religious, you might want to give this game a pass, though.

For those that want to see what the game offers, it has a 5-reel, 4-row playing field with 30 paylines. The background shows a creepy and dusty library with shelves full of arcane books, while a bust with horns stands to the side of the playing field. The art, in general, is nice but looks like it’s from a comic book, which means it’s not ultra-realistic. The use of plenty of shadows does give it a creepy style.

It reminded me of similar dark slots, including Mythic Maiden, Golden Grimoire and Witchcraft Academy by NetEnt. This game does lean a little harder on the idea of horror and evil, not only considering the game’s name but also its symbolism.

The sound was quite toned down during the base game, only playing a hard-rock tune when there was a win. Considering the game’s High Volatility this didn’t happen as often as I would have liked!

The game has a series of high- and low-paying symbols to fill the reels:

Unfortunately, the symbols aren’t really animated except for slightly pulsing when they’re part of a payline. They did all have clearly different colours and shapes which made it very easy to tell them apart. That’s a good thing too considering the high speed at which the reels spin in Quick Spin mode.

Devil’s Number is a pretty standard slot when it comes to its features. There is a free spins mode but most of the gameplay is focused on the base game. The other special features also don’t come out except in the free spins mode.

That’s not a lot of features but they do create a special gameplay experience. Most of the time the base game plays itself, with only rarely a win due to the high volatility. The real excitement comes from triggering the free spins mode with three 9’s on the screen.

I found the Upgrade and Remove features to have a simple function but they’re not explained exactly in the game itself. I had to check the paytable to see that getting a symbol on a winning payline would either upgrade or remove them for the remaining free spins.

There were definitely times where this worked in my favour and the end result was some very big wins. 12 free spins are quite a large number of spins after all. However, the other side of the coin was that I didn’t get much of anything sometimes either.

Even though the game came out in 2019, the same year Red Tiger Gaming released Vicky Ventura, the slot seems very toned down and simple. Although there are some nice details in the background and activating the free spins mode is nicely animated, it doesn’t offer a lot more to it. When I first played it I thought the game was a lot older than it was.

Nonetheless, the game plays well and I found the features to be quite interesting. Because they’re centred around the free spins mode and it didn’t trigger very often, it meant most of the base gameplay was rather simple. The high volatility also meant I would go a large number of spins before getting a win.

Players can choose a bet between £0.10 and £40. With the rather high coin value of wins, I felt it wasn’t too important how high my bets were since a single win could repay a number of earlier spins. The max. win is a 2,500x bet which is a good amount to keep us playing in my opinion!

Browse casinos with Devil's Number and other slots from Red Tiger. Create an account and try the game for free before making a deposit.

You can play Devil's Number in English, Finnish, Swedish, German and 18 other languages. 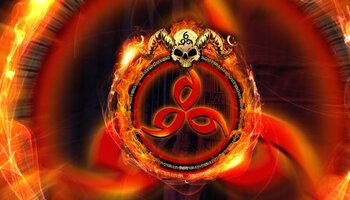