Diamond Duke seeks to bring to life the old-school fruit machines with a classic slot that takes a lot of cues from their look and feel. This game also adds some modern comforts, including a bonus wheel, multipliers and bonus symbols.

This slot was developed and released by Quickspin in 2020 but its age really doesn’t show considering the limited room, the few symbols and the lack of animations. The game feels very static which I suppose is what they’re trying to achieve, considering it’s a modern take on the old-school fruit machine. Perhaps one of the best features is the instant coin win since that actually shows off some graphics and animations.

Players who are a fan of the classic one-armed bandit will have a good time with Diamond Duke because that’s exactly what it offers. Players can expect the familiar symbols, the usual sounds associated with this type of game and the lack of features you’d find in modern slots. That’s not to say this fruit machine doesn’t have any features, they’re just toned-down and made to fit the setting.

As I mentioned, the sounds are exactly what you’d expect from a game that seeks to bring the fruit machine to life. A lot of loud beeps and jingles whenever it hits one of the 5 paylines on the 3-reel, 3-row playing field and not much more than that.

Since Diamond Duke is attempting to bring the fruit machine back to life, you shouldn’t be surprised that this game has all the original symbols. These are made to look like the ancient iterations as well, but the small size of the slot means that a lot of the details are lost.

As you can see the game has a minimal number of symbols but in combination with the low number of paylines, the game still averages out to High Volatility. Considering the lowest symbols also barely pay back a single spin, the fact that it’s very hard to get more than one win at a time means the player is dependent on 1 or 2 of the symbols to appear on a payline in order to make any funds back.

Diamond Duke offers players the ability to change their bet between £0.05 and £100 per spin to help mitigate the risk somewhat. The max. win of 8,000x your bet is a nice prospect but never felt achievable.

As a classic fruit machine, Diamond Duke has few options and even lesser features. That’s not to say the game is completely devoid of them though as Quickspin did make an effort to make it stand out a little bit.

The features you’ll find here include:

The base game offers no features at all, the only thing a player can do is look out for the Scatter symbols. The game only requires a single one to activate the Bonus Wheel. There is also a Multiplier Wheel which is the same but without the Coin Win option. Getting 2 Scatter symbols on the screen will activate both wheels.

The Coin Win Bonus Game is probably the most common and most appealing feature. Even though the wheel is almost completely filled with multipliers, in my experience it landed most often on the coin win. Once it’s activated it shows 9 buttons the player can press, either granting a coin win, upgrading the coin values or ending the bonus game and collecting the total wins.

The multipliers are a lot less common but also less useful since it only rarely happens you get a win when the wheel is activated. That means that the multiplier is essentially wasted on nothing since you didn’t have a win that could be multiplied.

All in all, the features are not very interesting but I found the coin win bonus game to be a great source of funds. Getting even a few picks correct can mean a win that is dozens of times your bet, making up for a lot of lost spins. This feature activated often enough to really make a difference. In comparison, the multiplier feature felt almost useless and almost never had any impact on my funds.

Diamond Duke is a classic fruit machine that has been re-released to entice some players to give it a try. I wouldn’t call it a bad attempt and reviving old glory as I did enjoy my time playing it, but it’s a very forgettable game in both presentation and gameplay.

The coin wins bonus game is the only real standout feature that I would recommend the slot for as it often rewarded big wins. It’s not impossible to get big wins during the standard gameplay but it’s very rare and honestly not very rare.

Any players that enjoy a slot with more than the basic gameplay will probably not have a very good time playing Diamond Duke. Even a few spins will show you exactly what you can expect.

Browse casinos with Diamond Duke and other slots from Quickspin. Create an account and try the game for free before making a deposit.

You can play Diamond Duke in English, Finnish, Swedish, German and 16 other languages. 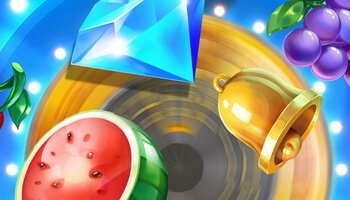