Diamond Riches is a slot that brings back the popular jewellery for both men and women and gives it a prime position in the theme: diamonds! This game lets players engage with wilds, free spins as well as a rather classic-looking presentation.

This slot was developed by Booming Games and released in 2021, making it one of their newest releases. The game brings players back to the classic days of video slots with a very rudimentary presentation. The 3-reel, 3-row playing field is presented blandly on the screen with the total win counter for diamonds on the left side. That way players can immediately see how much they’ll win when they get the diamond symbol on the screen.

There is little to talk about when it comes to the slot’s theme as it mostly focuses on the diamond symbol. The background has red dots and red squares to resemble a room but without context as to where we are. When there’s a win on 1 of the 10 paylines, the winning symbols light up and the total coin win shows up on the screen.

The game uses a jazz soundtrack to play during the game, which adds to the feeling that it is supposed to evoke the idea of a classic slot. I don’t really think it connects to the overall presentation of the game but it does sound good. The sound effects are less inspired and mostly only cover the spinning of the reels and a jingle when you win.

Diamond Riches only uses a small number of different symbols as they don’t need to cover a very large playing field. The symbols are all familiar to people who have played video slots before, with triple BARS, gold bars, and of course the diamond symbol. It’s all rather effective and works quite well but they aren’t exactly inspired. I also would have liked to have seen more animations.

The player will be dealing with High Volatility as they play this game, considering the rather low number of paylines. Even with such a small playing field, the number of symbols also makes it harder to create a win. To deal with this risk somewhat, you can always augment your bets to better fit your funds. Players can choose a bet between £0.20 and £20 per spin. This can easily be changed between spins, and I liked that it shows you all available bets instead of having to scroll through the options.

If you feel comfortable playing the game for a longer time you might end up winning the jackpot. In this game, it’s capped at a maximum win of 2,000x your bet. This is a sizable amount but considering the high volatility not quite on par with other slots that also have increased volatility. It made me wonder if playing this game is worth it for the big prize since it seems the risk-reward ratio is off.

Diamond Riches is a simple slot when it comes to the included features. This makes sense as it tries to stick rather closely to the original video slot appearance. That said it does offer some changes to the normal gameplay, even if those changes are in my opinion rather minimal. First a quick look at the features added to the game:

During the game, all wins except for those including the Diamond symbol will be three-of-a-kind. Since the playing field is small, the 10 paylines that are present will make most combinations a likely win, as long as the symbol appears on consecutive reels.

The only exception is the Diamond symbol itself. This one counts as a Scatter and will be added to the total number of Diamonds on the screen to decide the size of the win. On the left hand of the screen players can always see the value of a certain number of diamond symbols. This is also how the jackpot is won, by getting the entire playing field filled with Diamonds.

Even though the game is very simple when looking at the features, I found it to be quite compelling gameplay. The free spins mode doesn’t really add anything other than a small number of spins that might hit the jackpot but this is not more likely than during the base game. If you enjoy basic gameplay that will not cause any surprises, this slot does a fine job.

Diamond Riches feels very much like a classic video slot that is adjusted slightly to fit the more modern appearance. Disregarding the smaller playing field, most players will simply see a modern slot at first glance. I don’t exactly know why Booming Games decided to do this since it feels like they would specifically aim at classic players with this slot.

If you’re at all familiar with slots already you won’t be challenged by the features. They’re solid because they’re so popular, but the combination of features is not a rare sight. I think that the Diamonds as scatters is likely the biggest departure from standard slots. Even that is only a slight change.

The jackpot is okay but not as high as you’d expect from a slot with this volatility. I found my funds to hover almost exactly around my starting point, which does mean hitting the jackpot would instantly result in a big profit. Obviously, the problem lies in hitting it.

Browse casinos with Diamond Riches and other slots from Booming Games. Create an account and try the game for free before making a deposit.

You can play Diamond Riches in English, Finnish, Swedish, German and 23 other languages. 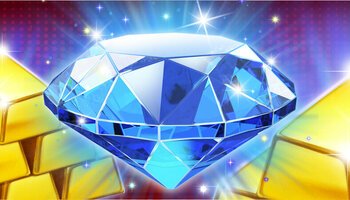