Diamond Vapor takes a look at the growing vape culture and decides to make it the topic of a simple and quick slot. With Wilds, Free Spins and Expanding Reels the game offers a sturdy if rudimentary experience!

Created by Endorphina and released in 2017, Diamond Vapor takes its inspiration from the growing influence of vaping. The 5-reels, 3-row playing field has a collection of original symbols on its 10 paylines that are all somehow related to vaping, although some require a little more knowledge about it to really recognize them. The background is just a plain colour which I felt was a missed opportunity.

The symbols are drawn in relatively high detail although they seem pixelated when playing the slot on a monitor. The game is clearly designed with the phone in mind, which is extra obvious due to the touchscreen controls where autoplay is accomplished by swiping the spin button across the screen.

Another element is that enabling the music means that the slot needs to actually download it first, something you don’t see in other slots that are intended for the desktop computer. The sound effects are similar to other Endorphina slots, with simple ticks for the reels spinning and short jingles when there’s a win. The only truly unique sound is the short music beat that plays occasionally.

The symbols used in Diamond Vapor can be divided between characters and items. There are no card letters or card suits to detract from the setting which I definitely liked. Unfortunately, the characters look awful. Not the art in which they are drawn, but everything about the characters came across as unappealing to me with their obnoxious vaping and their niche ironic hipster clothes. I suppose it is meant to target the sort of audience that likes that so perhaps other people won’t mind it.

The other symbols include various items used to vape, including vapes themselves as well as different liquid tanks. Whenever any of them are part of a win the symbols spin, except for the characters who blow out smoke.

The symbols in Diamond Vapor are:

Due to the nominal number of symbols as well as the features that aren’t super effective, the game lands on a Medium Volatility. Players can choose a bet between £0.10 and £100 per spin. In my experience, the game tends to stay relatively close to the starting funds but as I played for longer it started to trend downwards. Triggering the Free Spins mode was rather hard and the other features didn’t really help in getting big wins.

Endorphina didn’t use too many features to complicate this slot, instead of sticking to a few simple ones that augment the game slightly. The features are:

The gameplay during most of the game is very bare-bones with only the Scatter symbols doubling as Wilds to help the standard gameplay a little. They appeared relatively often and they can grant a coin win if there are 3 or more on the screen at the same time as well as activating the free spins mode.

The Free Spins mode wasn’t very common and during my time playing, I only activated it a handful of times. Also be aware that the volatility stays pretty high even during this mode, as I only won about a single bet worth of coins during a particularly poor 10 free spins. Other times I would win my bets back a dozen times so I can’t say it’s always going to be good or bad.

There’s only one feature that makes the free spins stand out from the rest of the gameplay and that is the expanding reels. They don’t always appear and the reels don’t always stop to actually fill the entire reel with the same symbol but they do arguably help in creating wins. Once in a blue moon, you’ll get the entire screen filled with the same symbol this way, but this doesn’t happen often.

All in all, the features are fine but not very interesting. The possibility of getting big wins isn’t great even during the free spins mode and even so, the payouts are small. I found the gameplay to feel very simple yet engaging enough to appeal to most players.

Have you ever thought that vaping would be an excellent setting for a slot? Do you enjoy the neon-colours and strange personalities this is associated with? Then you will most likely enjoy Diamond Vapor.

Players that are not necessarily drawn by the topic but by the gameplay will probably also get a kick out of this slot as the features are simple but effective and popular enough to warrant a place in this game. I thought the graphics were fine if a bit fuzzy on a larger screen while they look great on a phone, emphasising this game is meant to be played on the go.

Diamond Vapor offers players the prospect of a max. win of 1,000x their bet, with the game making the expanding reels feature just enticing enough to make you feel like you actually have a shot. In my experience though, keep a close eye on your funds and be ready to adjust your bet size if needed.

Browse casinos with Diamond Vapor and other slots from Endorphina. Create an account and try the game for free before making a deposit.

You can play Diamond Vapor in English 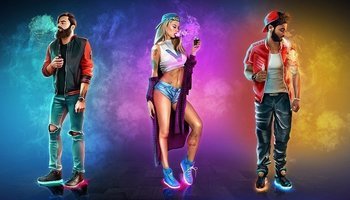