Diamonds of the Realms slot review

Play Diamonds of the Realms

Diamonds of the Realm is a game that lets the player experience the legend of Arthur in a new context, playing it on a modern slot. This game further adds several interesting features such as free spins, multipliers and scatter symbols.

This slot came out in 2021 after being developed by Play ‘n GO. This developer has built up a name for itself at constructing lavish slots and this one is no different. The main setting and theme are immediately obvious, with large animated symbols portraying different characters. Arthur himself obviously plays a large role but other characters like Mordred are included as well.

The game is built around a standard 5-reel, 3-row playing field. There are no megaways features or cascading reels here. Players simply spin the reels to see what happens. This means that there are a grand total of 20 paylines on the playing field at any one time, making it a little less likely to get a win during the base game.

Besides the stunning graphics, the slot also includes a soundtrack. This one I would consider high quality as well but not as balanced as the look of the game. The background music would often clash with the spinning of the reels, and getting a win would play a loud sound that interrupted the music. Because of that it would feel rather overwhelming.

Diamonds of the Realm takes place in Medieval fantasy times which involves brave knights, witches and mysterious gems. All of the symbols are original, including the low-paying ones. Those are made to look like various simple coins that might be used in that time. Meanwhile, the high-paying symbols are various detailed characters some players might be familiar with. Whenever they’re part of a win they play a short unique animation.

The game has a High Volatility that I felt was pretty obvious while playing. Although wins aren’t too rare, players shouldn’t expect to get a lot of small wins. In my experience, it would involve a number of spins without any wins and then a few with medium results. An RTP of 96.23% is a little above average but still I found my funds drop down quite fast.

Players can always choose to augment their bet to anywhere between £0.10 and £100 per spin. The results can vary. Bigger bets mean bigger wins but they also drain your funds faster. The opposite is true when you choose smaller bets. The free spins mode doesn’t trigger often but it might be the way to at least end up where you started. A few people might get their hands on the maximum win of 20,000x your bet.

Diamonds of the Realm keeps things relatively simple when it comes to its features. The ones that are included in the game can be considered quite old-school, with very few players being utterly unfamiliar with them. That’s not to say the game is boring though, as these features have been popular for so long for a reason.

Most players will be instantly comfortable playing this game, with very little to surprise them. It’s very much a game to just sit down and play. The only real quirk in the game, even though it’s been part of other slots too, is the multiplier wheel.

This wheel activates during the free spins mode, starting at 2x. When the player collects 6 scatters across the available spins they get another 5 free spins and the multiplier increases. The next step is x5, then x10 and finally x100. The multiplier wheel can also randomly activate during the base game but I found this to be extremely rare.

Diamonds of the Realm is a game by a prolific developer that shows what they can do. The slot looks gorgeous, with loads of details in both the playing field and the background. The characters especially look great with subtle animations and a clear colour palette.

When it comes to the gameplay, old-school players will likely favour this game over more modern versions. There are no megaways or non-standard playing fields. Only some set reels and scatter symbols.

The only downside I found was that the multiplier wheel is a bit difficult to activate, especially during the base game. With the low standard payouts, this makes it hard to keep your funds up unless you manage to trigger the free spins mode.

Play Diamonds of the Realms for free

Browse casinos with Diamonds of the Realms and other slots from Play'n GO. Create an account and try the game for free before making a deposit.

You can play Diamonds of the Realms in English, Finnish, Swedish, German and 30 other languages. 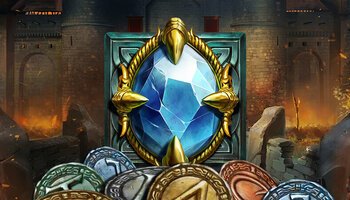