Dice Tronic is a Zeus Play slot set out in space where we are shown a collection of dice as they fall down the reels. The game combines a simple look with simple features, including Wilds, Scatters and Free Spins.

The game was released in 2015 and honestly, it shows. The graphics are looking dated with flat textures, simple animations and a lack of interesting elements. The game uses a classic 5-reel, 3-row playing field with only 5 paylines. This makes Dice Tronic barely more than an old-school slot. Unfortunately, its features also don’t elevate the game in any way.

The setting seems to be that you’re out in deep space with a planet and various asteroids drifting by behind the reels. Meanwhile, the reels themselves are filled with literal dice in different colours that are used as the symbols. It’s easy to see whenever there’s a win but that wasn’t going to be a problem anyway with the low number of paylines.

When it comes to the sound we can hear a sciency, electrical song play. It sounds fine but the problem is that the reels spinning make sounds that are almost exactly the same notes as the ones in the song. This means that the two sounds start to blend together, creating something very confusing to the ear. It made it sound like there were just random sounds playing and not a song vibing in the background.

As I mentioned above, the symbols in Dice Tronic are mostly just dice. Each of them faces a different side, showing a different number on them and with their own colour. I understand it’s made to fit the name of the slot this way, but it still screams a lack of originality to me.

The payouts for the higher paylines are quite high but it was almost impossible for me to get these. In general, expect a bunch of small wins that are rather spaced out. The game has a listed High Volatility which I felt was accurate. Players can pick a bet between £0.05 and £30 per spin to balance out the risk.

As with most of the game, the features are simple and based on common features that have been part of video slots since pretty much their conception. The features work well enough but I didn’t find them to add much to the experience either.

The only thing I think deserves some special mention is the fact that the Scatters and the Wilds are merged together into a single symbol. This makes it more likely to get some wins and trigger the Free Spins mode since getting 3 or more Wilds on the screen helps a lot.

Overall, as I was playing the game I was pretty bored. The graphics don’t appeal to me, the music is very badly mixed and the features are too bland to elevate the game in any way. The low number of paylines is really a detriment here because even Wilds will not always help to create a win.

I found it very hard to get into the Free Spins mode, with it only triggering two or three times during my time playing. When it did activate it also didn’t really offer any new elements to the gameplay, making it often very disappointing in terms of wins. The game doesn’t really offer any reason for a player to keep playing and hoping for a big win since it seems so unlikely they’ll get one.

What’s there to say about Dice Tronic. It’s a slot that combines dice with the video slot format without making it in any way memorable. There are a lot of things I could think of that would be possible with dice on slot reels, but instead, they are simply used as static symbols that act like any other symbols in other slots.

The graphics are very bland and simple, with the dice being exactly the same except for the number and the colour. There are no animations to speak of as the symbols are simple 3D models that shrink and grow when they’re part of a win.

Dice Tronic offers a max. win of 6,000x your bet which is quite nice but it never felt even remotely attainable. I can’t imagine the requirements to get that win, other than the highest symbol filling the entire screen and getting the 2x multiplier from betting the win.

You can play Dice Tronic in English, Bulgarian, Greek, Turkish 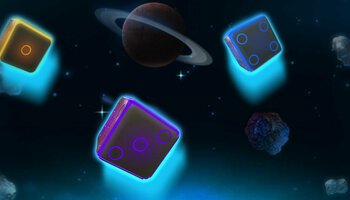