The only way that dinosaurs and ice-age beasts could roam the world together is in the Dino Reels 81 slot by Wazdan. But don't mind the laughable premise too much, as the game is about making cash wins. The reason why the number 81 is in the title is because the seven paylines can expand to 81 as per the game's extra feature.

If a mood for time travel ever crops up, this may be the online slot game that takes you furthest back in time. The game is about a couple of hunters who have erred in venturing in the jurassic era only bringing a rifle, instead of a rocket launcher

Dino Reels 81 sends you on a wild prehistoric animal hunt, which includes the two wayward time travelers that also appear on the paytable.

The symbols depict the extinct animals in a cartoonish way that is neither cute nor awesome. In fact, some of the dinosaurs look timid which adds to the overall impression that, idea-wise, this game is a paleontological mess.

I would have pretended none of the above was of any relevance had there been a bonus feature. Instead, there is just one feature, which, admittedly, comes with a seriously high payout potential.

Winning outcomes are paid for four matching symbols across the seven paylines, or across 81, when a wild symbol is present on the screen.

There are two low-paying and three medium-paying symbols. The first category consists of the adventurers (1x your bet) and the ice-age beasts (2x).

The second category consists of two herbivore dinosaurs and one avian, whose four symbols on a payline can rake-in 8x, 10x, and 12x your bet.

Last but not least, the animal that appears to be a sauropod youngling can fetch a gamy 60x your bet. The tzar in the dinosaur realm, T-Rex, appears as the wild and pays the most lucrative prize of 120x your bet.

In all fairness, this game is as eventful as dusting off a hill of dirt to uncover a fragment of a dinosaur femur. The lack of extra features and reel modifiers are responsible for the lacklustre look and feel of the gameplay.

On the other hand, those who are willing to stay in the game longer may witness a sighting of three and even four T-Rex symbols, which translates into a cash prize of raging potential.

It is a good thing that Wazdan enables players to change the volatility level. Low, standard or high, causes the maths to shift in another direction, so that you can dose your bets according to your expectations.

And, as per the usual with Wazdan games, the RTP is always above average, this time, at 96.42%

Browse casinos with Dino Reels 81 and other slots from Wazdan. Create an account and try the game for free before making a deposit.

You can play Dino Reels 81 in English, German, French, Spanish and 6 other languages. 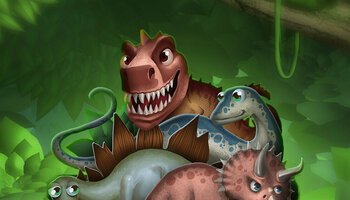