Dinosaur Rage brings a brave explorer deep into some long-forgotten lands where dinosaurs still roam the jungle and the explorer will need all her wits to survive. Players can watch her adventures as they use free spins, stacked symbols and a bonus game to follow along.

Developed and released in 2021, the slot was made by Quickspin who clearly poured a lot of their attention into creating this slot as it shines with great graphics, excellent animations and a lot of character. The game is set on some hidden island that hides a plethora of different dinosaurs that fill up the reels. These are shown on a 5-reel, 4-row playing field which has an impressive 1,024 paylines.

The background shows us a part of the island with some subtle details. I especially liked the detail where special symbols will make the reels shake and this results in the puddle the game is standing in to send out bigger waves. Other animations include the softly swaying trees. In the playing field itself, the symbols have their own animations, with the explorer being a stand-out in the way she moves even when not part of a win.

When it comes to sound design and music, the developer went for something pretty subtle during the base game. We only hear a slow song that we might find in classic adventure movies where the heroes are taking a break. The sound effects take up space by letting out roars whenever there is a win. Activating the free spins mode makes up for the softness as they kick the music into high gear. I think they did a great job.

Dinosaur Rage makes use of a series of stacked symbols for the high-paying symbols. These consist of different dinosaurs as well as the explorer. Only the Bonus symbol is a single tile large. Meanwhile, the low-paying symbols are filled up by using classic card letters. Although they don’t fit the theme, the designers made them look like they were carved out of dinosaur tusks which helps them mesh a bit better.

The game has High Volatility, granting only small wins occasionally during the base game and requiring one of the special features to activate in order to walk away with a bigger win. As I played the game I thought this volatility was quite strong but my funds didn’t drop too much. Players can pick a bet between £0.20 and £100 per spin, with a max. win of 17,000x your bet to strive for.

The payouts are very low since the high-paying symbols are stacked symbols, being between 2 and 4 rows high. It makes it more likely for a win to occur as wins are calculated by having the same symbol on the consecutive reels.

Dinosaur Rage doesn’t go out of its way to introduce any special features, relying on its design and appearance in order to hook people instead. The features that you’ll find in this game include:

The slot will mostly take place in the base game as getting the free spins to trigger was rather difficult. I only managed to do it a handful of time playing the game, even when I played more than an hour. That’s a shame since the free spins mode can be quite lucrative, making back a good number of spins in just a few free spins.

Depending on the number of free spins symbols on the screen, players not only receive more or less free spins but also a number of upgrades. Players get between 1 and 3 upgrades, which will make one or more dinosaurs enraged. An enraged dinosaur will count towards a win anywhere on the screen.

Finally, the free spins allow the player to re-trigger additional spins by getting bonus symbols on the screen during this mode. When all dinosaurs are enraged, each upgrade increases the total free spin multiplier by 1x.

Dinosaur Rage is a beautiful slot that’s clearly made with a lot of love for the topic, with all the drawings done in glorious detail. Each of the dinosaurs looks like they came directly out of Jurassic Park while the explorer has tons of character and is excellently animated.

The game has high volatility and you can expect to notice it. The payouts for regular wins are low and it’s not likely for the game to grant you multiple wins at the same time. Instead, the slot requires you to activate the free spins mode for any kind of substantial win.

I thought it was a fun game even besides the graphics and the design but I’m not sure everyone will appreciate the features and the volatility. Games like this require the player to stick with the slot for quite a while in order for it to pay off if it does at all, which might be too much for someone’s funds.

Browse casinos with Dinosaur Rage and other slots from Quickspin. Create an account and try the game for free before making a deposit.

You can play Dinosaur Rage in English, Finnish, Swedish, German and 24 other languages. 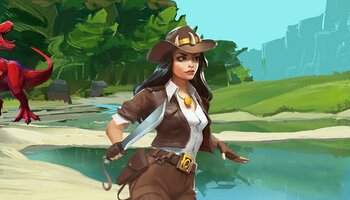