Dust off your bell-bottom jumpsuit and shine up those platform boots, you should be dancing with Disco Diamonds from Play’n GO. A 5x3 grid with a markedly fruity guise, Disco Diamonds is somewhat comparable to the ‘70s movie classic Saturday Night Fever but set in a greengrocer.

I hope you like neons because Disco Diamonds has a lot of them. A lot. Adorned with glowing pinks, vibrant purples, electric blues and a glitter ball so gold and shiny that it looks like a rotund Peter Stringfellow dipped in varnish.

The background resembles a TV talent show put through an art deco filter which is in contrast to the 70s dance theme. It seems Play’n GO are doing their damnedest to inject some funkadelia into an otherwise decidedly drab fruit machine.

Symbol design is a mix of traditional slot iconography and neon tube-inspired modernity. While the new-fashioned icons help fortify visuals, it’s going to take more than a hefty dose of soft-focussed lighting to reinvent the traditional fruity imagery on offer.

Alright, so not a lot going on graphically to call home about. A non-official commandment that echoes through slot provider hallways is: "The art is what attracts the players, but it is the math that keeps them.”. Let’s take a look to see if Disco Diamonds has the figures and features to retain interest.

For five symbols on a payline, the symbols pay like this:

With three bonus features, players can hoof it to the following:

Land the golden mirrorball symbol and you’re looking at one Free Spin. Any wilds found on the grid will transform into golden disco ball wilds, locking in place for the respin with any subsequent wins multiplied by 2x.

Should yet another golden mirrorball wild land on Disco Diamond’s 243 paylines, a further respin will be awarded another respin added for each golden mirror ball wild. This gives you the potential of unlimited multipliers and respins.

You’re looking at entering into a wonderland of 5, 7, 10 or 20 Free Spins with Disco Diamonds. Land the golden mirrorball to bring the disco respins feature to front and centre. If you’re lucky enough to land multipliers during respins, these carry over to the following respin.

If you had a 2x multiplier during disco respins, the multiplier would begin at 2x the next time you enter the respins feature. No Free Spin retriggers are on offer with Disco Diamonds.

For five symbols on a payline, the symbols pay like this:

Don’t Stop ‘til You Get Enough

Medium volatility Disco Diamonds comes loaded with a 96.29% RTP and maximum win potential of 10,000x. Minimum and maximum bets are set at £0.1 and £100 respectively.

The pacing of Disco Diamonds isn’t particularly well-pitched, giving players more moments of low action and fewer periods of high gameplay intensity. Slot producers would like you to be on a rollercoaster, your heart in your mouth, beating like an angry Ringo Starr while anticipating your next big win.

‘Seat time’, the industry term for how long a player spends on any one game, would be minimal with Disco Diamonds. The desired 'roller coaster' left rusting on the theme park scrap heap.

Overall, Disco Diamonds feels derivative. When opening a slot, players should feel a twinge of excitement, a quickening of the pulse, a gulp of astonishment. For a slot promising a lot of groove, it's sadly as dead as disco.

Browse casinos with Disco Diamonds and other slots from Play'n GO. Create an account and try the game for free before making a deposit.

You can play Disco Diamonds in English, Finnish, Swedish, German and 30 other languages. 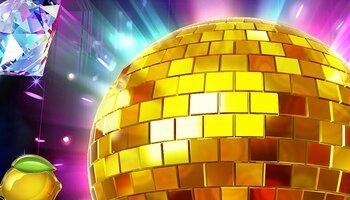