Divine Ways sets us on the path of spiritual enlightenment as we proceed through the beautiful Asian surroundings. The game offered me a nice combination of rustic views and some exciting features.

Released in 2016, Divine Ways is a Red Tiger slot that has taken the concept of spiritual enlightenment and tried to integrate it into a video slot. I found the idea to be very intriguing even though the execution could have been a little more intricate. Still, the 5-reel, 3-row slot with 20 paylines offers enough excitement to players to enjoy.

The game looks good, about on par of what I’ve come to expect from this developer. The low-paying symbols are made to look like they were painted on a canvas with a few loose strokes. Unfortunately, these symbols are exactly the same as the ones that appear in Red Tiger games like Fortune Fest, God of Wealth and Golden Lotus. It’s so blatant that even the colours are the same.

It’s unfortunate because the remaining symbols are rather beautiful. They depict different mythical and normal animals in all their glory, original art that has been created for this slot specifically. I don’t know why the developers chose to fill the remaining tiles with copy-pasted card symbols but they did.

The sound design leans on the Chinese theme quite heavily and again sounds very similar to some of their other slots. I don’t really mind the uncreative approach but I wish they would have at least created something original. There isn’t much more to add about this I’m afraid.

As I mentioned before the symbols look good but the low-paying ones are unoriginal and copied from their other slots. Considering the number of games Red Tiger released in 2016 I’m sure this was due to time constraints but it doesn’t reflect very well on their creative abilities.

Even though the game has a Medium Volatility the high-paying symbols have impressive payouts, especially for a full five-of-a-kind payline. The cloning wilds help a lot in creating these win lines but they weren’t terribly common in my experience. As I played, choosing a smaller bet between £0.10 and £60 per spin proved to be the best way to increase my funds.

Divine Ways opted to stay close to the classic slot experience and didn’t include very many features. There is no bonus game nor can we trigger a free spins mode. The features it does have are:

With Wilds being the only feature in the game, it’s quite disappointing to have to say that they didn’t appear very often at all. The Wilds were very rare and I would often spin dozens of times without seeing a single one. On the other hand, since the Wilds clone themselves, it was likely to facilitate a win when they did appear.

The pattern the Cloning Wilds took was unpredictable. I had times where they went in a circle, creating a 2x2 block of Wilds, while other times they would move in a jagged pattern or a straight line. Most times the Wilds would clone themselves 3 or 4 times, but it was possible for them to clone themselves enough to fill the entire screen. When that happens you will get the max. win of 888x your bet.

The simplicity of the slot had some appeal to me. It was easy to play for a few minutes and get a grip of the volatility and the appearance of the wilds, after which I could mess with my bet amount to see which one was the best balance between risk and reward.

Divine Ways is in many ways a rather lazy attempt by Red Tiger to produce another slot. It has a similar theme as most of their other slot, as well as blatantly copying symbols and music from those games. On the other hand, it still looks amazing and the cloning wilds mechanic is simple but effective.

I found the game to be enjoyable because of its simplicity, offering me the opportunity to experiment without risking any big losses. At the same time, the listed medium volatility felt a little generous as big wins were very dependant on cloning wilds cloning themselves in the right way.

If you’re a player that is looking for a Red Tiger slot that isn’t too complicated but offers some serious gameplay, Divine Ways might be your answer. Those people that prefer something with more unpredictable but exciting features should probably look further.

Browse casinos with Divine Ways and other slots from Red Tiger. Create an account and try the game for free before making a deposit.

You can play Divine Ways in English, Finnish, Swedish, German and 18 other languages. 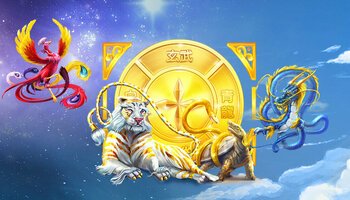