Doctor Electro shows us the life of an eccentric professor who spends his time dealing with electricity in order to perform experiments. This game further features expanding reels, 2 jackpots and free spins to keep the players entertained.

Released in 2019, this Kalamba Games strives to bring us into the world of cutting-edge technology and strange experiments as we watch this doctor at work. The game is built around a 5-reel, 4-row playing field that has an additional 3 rows it can unlock. Behind the reels, we can see his laboratory, involving him standing on a floating platform as well as a plethora of machines and devices.

The game looks quite good and there are some subtle animations that help bring the character and his lab to life. The man himself is seen standing on the left side of the playing field, moving organically when nothing is happening but also celebrating when there’s a win or activating the features. We can also see different coils and cables sizzle with electricity as the game goes along.

On the playing field itself, there is some movement as well. The game can expand the reels by sending electric pulses through them which is animated. Some of the symbols themselves also move on their own, usually showing off different electrical effects. It all fits the theme quite well and it brings the whole game to life.

Doctor Electro features a standard collection of low- and high-paying symbols. Card letters are used to fill up the low-paying symbols, which unfortunately do very little in terms of adding to the setting. The high-paying symbols consist mostly of different characters that we might find in the doctor’s laboratory, but it’s never really made clear who they are or what their purpose is. These symbols also aren’t animated whenever they’re part of a win.

Speaking of wins, the game has a total of 1,024 paylines during the base game which can increase to 16,807 paylines when the playing field has grown to its maximum size. Despite this, the slot has High Volatility, mostly because you won’t have the playing field at its maximum size very often. There are also a lot of different symbols and those do not pay out huge amounts when part of a win.

Players can deal with the volatility by having their bets adjusted. This can be done through the menu and allows players to pick a bet between £0.30 and £45 per spin. As a result, it can be easier to get a bigger win or it will take longer to lose a significant amount of coins, depending on the choices the players made.

The game features a wide variety of symbols, including:

Doctor Electro boasts a selection of features that will augment or enhance the gameplay of this slot. Most of it has to do with the expanding reels, but there are also a jackpot and free spins players can win coins with.

The game’s focus on the expanding reels should be obvious to anyone playing the game for a limited amount of time. The goal here is to get Expanding symbols on the screen one at a time which will help unlock the different tiles above the playing field. Once the hyperspin mode is triggered, by getting 3 Expansion Symbols on the screen, all the tiles that were unlocked will open up and increase the total number of paylines on which to win.

In my experience, the base game won’t offer too many opportunities to get big wins but activating the Hyperspin or Free Spins mode will make it more likely that bigger wins are hit. The opportunity to activate the Hyperspins manually is an attractive option but does cost a hefty amount of coins.

Doctor Electro is a slot that does a good job at using its appearance to tell a story. Even though there is little information given about the nature of the character, his crew or his experiments, the player will develop their own little narrative as they play.

The gameplay is nice albeit maybe a bit excessive. There are a lot of different features at play here and especially the Hyperspin and Free Spin features resemble each other a lot. The player will do well taking a glance at the paytable to make sure they understand how it works.

If you’re looking for a fun slot that will reward you with the occasional bigger win, I would recommend this game. The option to activate the special feature at will might also be an interesting thing for power players.

Browse casinos with Doctor Electro and other slots from Kalamba Games. Create an account and try the game for free before making a deposit.

You can play Doctor Electro in English, Finnish, Swedish, German and 9 other languages. 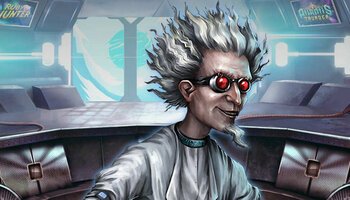