Dolphin’s Luck 2 dives deep into the ocean where we are greeted by playful dolphins and a plethora of other deep-sea creatures!

Created by relatively new developer Booming Games and released in 2017, Dolphin’s Luck 2 is a standard 5-reel, 3-row video slot with 20 paylines that is set in the depths of the ocean. The game offers players a familiar, classic play experience that is slightly tweaked with some simple mechanics.

Dolphin’s Luck 2 is obviously an updated version of Dolphin’s Luck which has been rather popular with many players. Other games that I was reminded of are Lucky Angler by NetEnt and Golden Fish Tank by Yggdrasil. Obviously, these are bigger developers and the slots are much more refined but in terms of gameplay that shouldn’t matter!

It’s clear that Dolphin’s Luck 2 was produced by a team with limited means. The graphics are rather simple and don’t compare well to the bigger developers. There are only small animations in the background such as air bubbles drifting up. When there’s a win, the symbols involved light up and the high-paying symbols have a short, looping animation.

The music is unfortunately very simple. The sound effects stay close to the industry standard of a quick little jingle, although I did like that the spinning reels sounded like bubbles. The music is a very mellow sounding Caribbean tune which I found rather ill-fitting but it wasn’t detrimental to the experience.

The game has a collection of symbols, divided into the high-paying symbols made up out of animals and low-paying symbols based on high cards. All the art was rather simple but not ugly. My main complaint would be that it all looked small. The high cards are unfortunately just the different letters and numbers without any attempt to integrate them into the theme of the game.

Because it has a high number of different symbols, Dolphin’s Luck 2 is listed with a Medium Volatility. I found that to be pretty accurate because of the frequent appearance of wilds that helped in creating winning paylines.

There are a few simple features added to differentiate Dolphin’s Luck 2 from other slots. None of these features will be that original or surprising but as always, it’s how and in what combination they’re implemented that have the biggest impact!

The first thing I would like to note is that it isn’t clear that the Dolphin is a Scatter and the Pearl is a Wild symbol. There isn’t any indication of that while playing the game, making it rather tricky to ascertain if you’re close to a win. Only when I looked at the paytable did I notice that those symbols also act as features! Just something to keep in mind.

One of the most important aspects of the slot is the fact that reel 4 is always filled with Stacked Wilds. That means the entire reel is filled with Wilds and even though reel 4 doesn’t really help in getting a win in the first place, it does mean that generally any three-of-a-kind win will automatically be turned into a four-of-a-kind.

That said, it’s not guaranteed because even though the reel will usually be stacked with Wilds, it can occasionally happen one of the 3 symbols is a Scatter symbol. This is so that players have a shot at getting a five-of-a-kind win with Scatter symbols! Even though the fourth reel is always filled with Wilds, they do still show up on other reels quite often as well.

Getting 3 or more Scatter Symbols on the game was easier than I expected. I would even have back-to-back free spins sometimes. The downside is that they’re not very profitable. They are not augmented in any way by features that are only active during the free spins mode. The main thing that’s different is that it doesn’t require coins to spin.

In my experience, my funds stayed pretty stable and the number of wins I had was rather frequent. Players can choose a bet between £0.03 and £60 per spin which makes it very easy to select a value they’re comfortable with. The max. win of 5,125x your bet is also respectable. Unfortunately, I didn’t find the features to create any particularly interesting combinations.

Dolphin’s Luck 2 is a standard slot that offers some nice features but doesn’t do anything that experienced players haven’t seen before. The features that are included all operate as they are expected to. The stacked Wilds reel is a nice addition but with it being reel 4 it doesn’t really add to the likelihood of getting a win out of it.

The graphics and sound are all acceptable but considering the possibilities which the bigger developers showcase it makes the difference even starker. I do commend Booming Games for putting the effort in, from the animations on the high-paying symbols to the soundtrack. They don’t quite hit the high marks but there is definitely potential there. Plus we should keep into account that the game is several years old by now.

If you’re the type of player that is always interested in a slot set in the ocean or a classic slot experience with some up-to-date graphics then you might enjoy Dolphin’s Luck 2. Unfortunately, there isn’t much else to keep players exploring their depths!

Browse casinos with Dolphin´s Luck 2 and other slots from Booming Games. Create an account and try the game for free before making a deposit.

You can play Dolphin´s Luck 2 in English, Finnish, Swedish, German and 23 other languages. 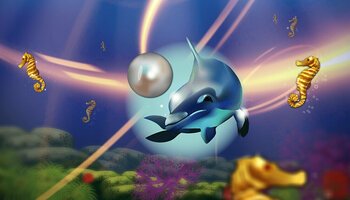