Dolphins Treasure is a game that’s obviously set deep in the ocean where a playful dolphin hides a mysterious treasure. This 2015 slot offers players a bonus game, free spins and multipliers as they explore the depths of the sea.

Created and developed by Evoplay Entertainment, Dolphins Treasure makes use of some familiar features and design choices. The game is made with 3D software that has begun to look a little dated. The graphics look a little flat and the animations are a bit stiff, but this does not detract from the overall mood. A big part is a massive galleon we can see in the distance, clearly sunk a long time ago.

The 5-reel, 3-row playing field is filled with a variety of different symbols, some of these original while others are card letters. Even those are made to look like you could reasonably find them on the ocean floor. When part of one of the 9 paylines, all the symbols have their own brief animation although you shouldn’t expect too much. With its Low Volatility, the game offers a steady stream of smaller wins.

If you were expecting something original when it comes to the sound I’m afraid I’ll have to disappoint you. The chitter of a dolphin obviously takes up a prominent role in the sound design, playing whenever the playful dolphin shows up in the game. When it comes to the music you’ll hear a simple Caribbean song that reminded me of various children’s movies set in the ocean.

While the symbols in Dolphins Treasure aren’t the most original I did like how they fit the theme of the game. They’re also quite colourful which helps create the idea of a type of coral reef. Meanwhile, some of the symbols do look a lot alike which can make it a little difficult to tell whenever there’s a win.

Players can choose to bet between £0.10 and £500 per spin which is quite a difference. Considering the fact the game uses coins to keep track it’s important to keep in mind how much is actually being spent as you spin. With a maximum win of 652x your bet, it’s also wise to keep in mind if the benefits are worth the risk.

I thought the payouts for the different symbols were quite high especially considering the volatility. It does mean that its unlikely for a player to get more than 1 win on the screen at the same time. Only the lowest 3 card letters don’t make back the original bet with three-of-a-kind, while all other symbols will. Obviously, the more symbols on a payline the bigger the coin win.

Dolphins Treasure doesn’t really do anything very original or exciting, especially considering the other Evoplay slots that exist. Things like the bonus game can be found in Prohibition while the Free Spins are arguably done better in other Evoplay games.

To begin with, let’s look at the features themselves:

The first two features won’t surprise anyone, with the Wilds appearing often enough to facilitate some wins but not being a very big part of the game either. An interesting thing to note is that some of the symbols are already winning when there is only two-of-a-kind on a betline, meaning that a Wild can easily help create several wins at a time. They won’t be very high but it’s still nice.

The Free Spins activate with 3 or more Scatter Symbols. Unlike other Evoplay games, you don’t get to choose from 3 bonus cards that either grant a 2x or 3x multiplier or another 20 free spins. In that regard, this is a worse version of the same game.

Meanwhile, the bonus game reminded me of the bonus games in Prohibition and Robinson although again this version is arguably worse. The player gets to pick between six seashells. Each hides a coin win but one says Collect. If the player chooses that one the game immediately ends and the player is returned to the base game.

The reason it’s not as good as the same bonus game in other games is that those make it unlikely that you’ll choose to Collect immediately. In the case of Robinson, it’s not even possible. You are guaranteed to walk away with at least 1 coin win there, but that’s not a guarantee here. Considering that this slot is older, it seems likely the developers have updated their design for this reason.

For me, the features in Dolphins Treasure are fine but considering the better version of them in other Evoplay slots I would suggest you try those out instead. The games all play almost identically, meaning that players won’t miss out on anything if they decide to give this one a skip.

Dolphins Treasure is an older slot and it shows in both the graphics and the gameplay. Other slots by the same developer feel more complete or active and as a result, I would not recommend this game. It’s not that the game itself is bad but compared to other slots it just lags behind.

My experience with the game also held that my funds would slowly drain with only the occasional win big enough to compensate for my losses. Considering the low volatility this really wasn’t enough to keep my funds on the level that I started which meant it felt like I wouldn’t get the coins back.

If you’re a big Evoplay fan who for some reason has never played Dolphins Treasure before it might be a fun dive into nostalgia for you. For other players, both casual and experienced, I would suggest other slots that offer more depth.

Browse casinos with Dolphins Treasure and other slots from Evoplay Entertainment. Create an account and try the game for free before making a deposit.

You can play Dolphins Treasure in English, Chinese 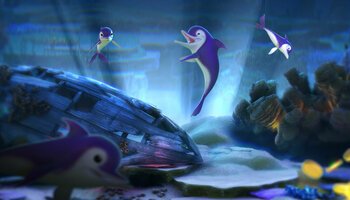