Donuts is a slot by Big Time Gaming which takes one of the most popular treats in America and uses it as the basis for a fun little slot that further includes Expanding Reels, Free Spins and Multiplier Wilds.

Released in 2018, Donuts doesn’t really strike me as the pinnacle of graphical ability for this relatively young studio. The images are sharp but the colours are extremely bright, the symbols are simply drawn without a lot of animations and the background looks quite barren and lifeless. Nonetheless, this 4-reel, 4-row playing field with up to 2,401 bet lines does have a certain charm.

This charm most definitely comes from its subject matter, with doughnuts being its main focus. There are different types of doughnuts that act as the high-paying symbols, while the low-paying symbols are unfortunately just simple card letters. In the background, we see a massive doughnut on top of a restaurant in the middle of the desert. Why is it there? Nobody knows!

When it comes to the music, the developers decided not to go all out and opted for a low-key background sound that played as the reels spun. Any wins were amplified slightly by a simple jingle, but in general, the slot keeps everything relaxed and toned-down. Only triggering the free spins mode would activate a special song.

A slot with such a simple premise is obviously going to fill itself with doughnuts. There are doughnuts everywhere but unfortunately, not many of them are animated. The most we can expect is a box of doughnuts opening up to reveal a random symbol. Other than that, the game is largely static apart from a symbol growing in size for a moment.

The payouts for a single win are extremely low, seemingly because the game believes it will award multiple wins at the same time, or that the features included in the slot will help create bigger wins. In my experience, this wasn’t true at all. Even regular sized wins of a single payline were incredibly rare, which resulted in an almost catastrophic decline of my funds as I played.

Even with a smaller bet, picked between £0.05 and £500 per spin, my funds went down very quickly without ever feeling like I had the opportunity to recover. This could just have been my play session, but I feel like it would be the average experience for most players considering its High Volatility.

To compensate for this volatility, Donuts uses a series of features. Unfortunately, I found the features to both be confusing and unhelpful. First, a quick overview of the different features:

Players will find themselves watching the base game for most of the time as the Free Spins mode is extremely hard to get into. I played this slot for more than an hour and only activated it once, which considering the high volatility is almost a death sentence on your funds. The game really emphasises the importance of this mode, considering it offers a dozen or more spins and multipliers that can go up to 50x your bet.

Instead, the base game only gives players the usual gameplay mixed with some confusing extra features. There is a box in the game that can appear at any time and reveal either a number of doughnuts or a Wild. The Wild can have a multiplier associated with it, although it usually doesn’t.

Meanwhile, when the box shows a number of doughnuts, they are meant to contribute to triggering the free spins mode but it never really explains how. Even diving into the paytable I had a lot of trouble understanding how it worked, and while playing the game it never showed itself to be logical either.

Donuts scores some points for being an original concept, even something as simple as doughnuts. Unfortunately, that’s where my compliments for the game end. There isn’t a lot of appeal to the graphics as it all looks extremely simple. The music is very simple and repetitive and could have benefited from being more playful. We are talking about doughnuts after all.

Something that might get players to come back to this game is the massive jackpot, a max. win of 36,015x your bet that does feel relatively attainable. The only thing you have to do is hit the maximum multiplier at the start of the free spin, and then get the free spins to fill the screen with the highest paying symbol!

Overall, I can’t recommend Donuts to many people. Power players that are looking for high risk, high reward slots might get something out of Donuts. People who enjoy something a little laid back and easy to get into will do well looking on, as even I had a lot of trouble figuring out a bunch of the features.

Browse casinos with Donuts and other slots from Big Time Gaming. Create an account and try the game for free before making a deposit.

You can play Donuts in English, Swedish 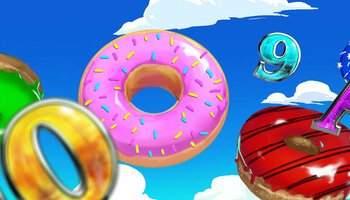