Double Stacks takes the concept of the classic fruit machine and blasts it into the future with neon symbols, stacked reels and free spins!

Developed by NetEnt and released in 2018, Double Stacks jumps off the screen with its neon-coloured symbols, thumping soundtrack and selection of moderate but significant features. Using a standard 5-reel, 3-row playing field with 10 paylines the game stays close to the classic slot layout, however, keeping it relatable to players that enjoy those type of slots.

I am not a huge fan of the classic fruit machines because I think they’re usually simple and contrived, innovating very little if at all and making it difficult why to pick one of them over all the others. Double Stacks also falls into that trap but at least attempts to stand out with its crazy neon symbols.

While the symbols are still the usual fruit machine variation they are all turned up to 11, with colours that almost shone off the screen. Not only that but the entire game is designed to amplify this idea. When getting the free spins mode the reels disappear and a stylish text screen appears, flashing the letter FREE SPINS on the screen before switching to the actual feature.

Meanwhile, there is a low-energy techno song playing in the background while the reels spin. Triggering the free spins mode switches it to an upbeat tempo with a thumping bass as the free spins go. Really got the blood flowing as the wins kept stacking up!

All the symbols in the game are based on classic fruit symbols. The twist the artists gave it was the neon hue to them, making them almost literally shine. Even little details like the glow touching the textures behind them enhance the idea they’re shining bright.

A special feature that I’ll discuss later is the Double Stacks feature, which causes all stacked symbols to double up. This means they appear as two symbols on a single spot, also doubling their value.

I thought all the symbols looked great. When they double up they have a small animation and getting a winning payline has the background flash. The free spins mode looks the same as the base game, unfortunately.

Double Stacks doesn’t have a crazy number of features but there’s enough of them to shake up the classic fruit machine experience. In short, they are:

The main feature in the game is obviously the Double Stacked feature. This one pops up very frequently, almost every spin in my experience. Obviously this doesn’t mean there is always a win but their regular appearance makes a larger win more likely. The listed High Volatility definitely rings true, however. Even with the Double Stacks, the game goes through your funds very quickly and it only rarely pays off.

I started playing this slot with a small bet per spin with the idea to increase it as I got a grip on how often it pays out, but I kept it small the entire time because I didn’t feel like it was worth it investing heavily. Even though the prospect of a max. win of 1,000x your bet is appealing, I felt it wasn’t quite balanced with the volatility. Luckily, the game allowed me to choose a bet between £0.10 and £200 per spin which gave a lot of wiggle room.

As far as fruit machines go, NetEnt’s Double Stacks goes a long way in making it interesting for players like me. While the core gameplay sticks very close to what everyone is familiar with, the flashy looks and the added features help in keeping it interesting.

I really liked the neon look of this slot and I played it longer than I probably had to just to enjoy the visuals. It is flashy and over the top and I must say I would like to see more slots deploy this type of aesthetic. The sound stayed a little too much on the background for my taste, I think a bolder and louder techno beat might have elevated the slot just a little bit more.

Browse casinos with Double Stacks and other slots from NetEnt. Create an account and try the game for free before making a deposit.

You can play Double Stacks in English, Finnish, Swedish, German and 21 other languages. 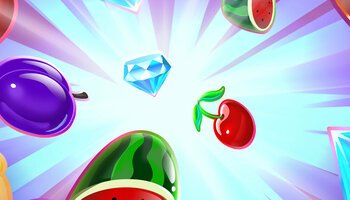