The pot of gold at the end of the rainbow can be reached if players follow the sevens and clovers on a game called Doublin’s Gold.

The inevitable leprechaun is there too to keep you company on a game that has a maximum win potential of 500x your bet.

This is a cute amount for a low variance slot. I take it that all of the small payouts that naturally crop up with the math model can be offset by a big win in the free spins bonus or by the multipliers that come with the wild symbol.

Booming Games has placed the Emerald Isle setting on a layout of three reels and three rows that can turn up winning outcomes on ten paylines. In this regard, Doublin' Gold may not stand out as unique but I think its advantage is in the math model, as low variance slots have become quite a rare sighting in recent times.

Players who reach out for this game will soon discover that winning outcomes are paid for several combinations composed of "any" set of symbols. I will save this detail for one of the sections below because I think it is something that defines the game and that some players will find it worth exploring.

If the title doesn't give it off with its spin on the word Dublin then the heel-clicking leprechaun certainly will. The theme is unmistakably "Irish" in nature, even though you aren't going to find any object from the leprechaun's inventory of harps, smoking pipes, cylinder hats, pints of lager, toadstools, etc.

All of the symbols on the paytable are variations of the number seven and variations of the clover symbol. I think it works like a charm (pun intended) that the symbols are consistent in shape and size, while the colour layout is notably different with gradients of rainbow, gold and emerald glitter.

The bottom line for me is that I am not completely enamoured by the graphic design, but I think it does just enough to have you interested in the payout potential via its rare math model.

Doublin Gold is quite simple once you get to it, as it doesn't come with any extra features. Despite it, the game is somehow, magically dynamic due to the short payout frequency.

Doublin Gold can take bets that are as little as 10p per spin which translates to one penny per payline. The maximum bet is an exorbitant £500 per spin for a low-paying, low variance game, but hey, I can't tell high-rollers how to play their online slots.

In terms of the potential payouts, these can be as little as 0.1x your bet or as high as 50x your bet, but there is always the possibility of winning on more than one payline on any spin.

The paytable is split right down the middle, as there are plenty of low-paying and high-paying symbol combinations.

For example, a combination of any green, rainbow and gold clovers pays 1.5x your bet. That's more than your bet. The fifth winning combination from the bottom pays back your bet at 1x and all preceding ones pay less.

You definitely want to see more of the sevens on the reel set and the game is surprisingly not stingy in that regard. I've won outcomes composed of the various seven symbols with and without the wilds. These pay between 7.5x and 20x your bet which I think is quite decent.

In summary, I enjoyed playing Doublin Gold but in my experience, payouts that were lesser than the bet far outnumbered those that paid double the bet or more.

Do I recommend the game to other players? Yes, please give it a try. I think low variance games are rare and therefore unique because they tend to have a payout frequency that is a lot more narrow than medium and high variance slots.

Browse casinos with Doublin Gold and other slots from Booming Games. Create an account and try the game for free before making a deposit.

You can play Doublin Gold in English, Finnish, Swedish, German and 23 other languages. 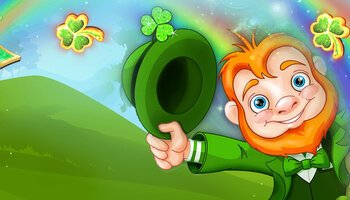