Based on the most popular gothic novella, Dr. Jekyll & Mr. Hyde delivers on both wonder and terror.

Walking down the Victorian streets of London you never know who you might meet. It’s very much the same with this 5-reel, 3-row slot with 30 active paylines. You may encounter the mild-mannered Dr Jekyll or the mysterious, yet sometimes violent Mr Hyde. Whoever you meet, some very interesting features will be triggered.

Although the slot feels somewhat clunky during gameplay, I soon got used to the rhythm of it. Most of this feeling comes from the FX which in my opinion don’t work but both the soundtrack and the design of the slot make up for that. These two elements deliver on the whole aura of Dr Jekyll & Mr Hyde.

All symbols draw from the gothic, Victorian era. Even the characters of Jekyll, Hyde and the inspector are exquisitely designed to fit the period. I also love the dark, grungy feeling of the slot, especially when nowadays so many slots tend to be uber-polished.

Whenever a red potion appears anywhere on the reels it is added to the meter. You need 10 red potion tiles to appear to trigger the free spins round. But this is where it gets interesting! The free spins end only when the blue potion meter is filled up (you need 5 blue potion tiles for this). And during free spins, there is a higher probability of the below features to occur.

If Mr Hyde appears on the third reel with a blue potion right next to him on reel 2 or 4 you are awarded a bonus. This can be anywhere between 5x and 20x.

Getting a Mr Hyde, Scatter and Mr Hyde combination on reels 2, 3 and 4 will trigger the Frenzy Bonus (my favourite feature). Here you get to roam the streets as Mr Hyde stealing from shops and trying your best to avoid the Inspector. You get to choose to either go left or right. Every action can either win you money, make you lose half your winnings of the round, or stop the frenzy. Here there’s a chance to win up to 66x. But my winnings always seemed to average 15x.

Getting a Dr Jekyll, Scatter and Dr HyJekyll combination on reels 2, 3 and 4 will trigger the Potions bonus. In this round, you’re trying to conjure up the anti-monster serum. But be careful if you choose the wrong potions you will get a smaller win. Find all the right potions in one go and you can win up to 160x.

Every time there is a win on the base game you have the chance to play the risk game. It’s a straightforward heads or tails game that is in style with the rest of the game. Each correct guess doubles your win. A wrong one will set the win to 0.

This game was developed back in 2014 but even though it’s a few years old, I still enjoyed playing it. Yes, the FX make it feel clunky but if you can oversee this little nuisance there’s a lot of fun to be had here.

Even though its variance is set to medium, I was surprised by the number of times features were being triggered. Admittedly, there aren’t huge wins and in fact, most of my returns hovered around the 15x, but at one point I was getting through quite a few features.

I also like the fact that you can see how far you are from a bonus round with the red potion feature. Of course, this all rests on how many red potion bottles you get when spinning. But seeing the counter go up gave me a sense of satisfaction.

Browse casinos with Dr. Jekyll & Mr. Hyde and other slots from Betsoft. Create an account and try the game for free before making a deposit.

You can play Dr. Jekyll & Mr. Hyde in English, Finnish, Swedish, German and 22 other languages. 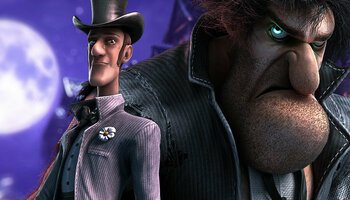