Any vampire hunters amongst slots players will have a blast playing against the world's most beloved Transylvanian. Since Count Dracula is not a fan of silver (damages him), the vault in Dracula's Castle keeps cash money only and the players can take a bite of a decently sized chunk, which in precise terms is a max payout of £100,000.

First things first, the game plays like a true 3x5 slot. But, it comes with only five paylines, which I find limiting and unnecessary for a modern slot. I mean, why would anyone take such a cool theme, give it a decent graphic design, and not include at least 10 ways to win?

My first impression of the game was that it scares the bats out of you with the help of a perfect selection of nightmarish sound effects.

In terms of the graphic design, Dracula's Castle does well to hold your attention. The symbols tell a Dracula-centered story which involves a couple of she-vampires, tombstones, the castle and bats.

On the other hand, the hit frequency when playing medium or high volatility can serve you a true horror story. It's a pity because, in my opinion, the game could have fared much better had the maths been drawn to turn up more picture symbols instead of cards.

Dracula's Castle isn't the most welcoming of places when it comes to extra features, but it does offer a couple of surprises.

The low-paying symbols are tombstone-like carvings of the royal cards, the ten and the nine. Regardless of the number of spins you make on Dracula's Castle, you are under the impression that the card symbols always dominate the reel-set.

The blonde and brunette she-vampires are the two most valuable symbols after the wild. With only two matching symbols on a payline, these can pay 2x and 4x your bet in that order. Five matching symbols can result in payouts of 125x and 250x.

Count Dracula, the wild symbol, dishes out the jackpot prize of a rather amazing 1000 times your bet.

Wazdan is a company that likes to strike a most positive impression amongst players, so they've ensured that you can win back the stake for hitting three of the lowest symbols on a payline. In other words, not a single symbol on the paytable pays less than the bet. The theoretical RTP is 96.56% which is above-average and the volatility is selectable from the button in the bottom right corner.

The payout amounts are impressive but, on the other hand, the game comes with only five paylines and doesn’t even offer a free spins bonus, so it will be a tough sell for a slot playing public that is keen on that key bonus feature.

Browse casinos with Dracula's Castle and other slots from Wazdan. Create an account and try the game for free before making a deposit.

You can play Dracula's Castle in English, German, French, Spanish and 6 other languages. 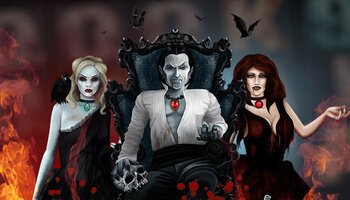