Dracula has arrived in England, and needs your help to find his next meal! Lure in the ladies, bribe the poor and offer a drink to a drunkard, whatever it takes to guarantee it’s not your neck on the line.

Dracula is probably the most iconic monster in the world. Everyone knows this noble-born vampire, as he has appeared in books, movies, cartoons and games. The slot was released in 2015, and it was a successful collaboration between NetEnt and Universal. It introduces us to Dracula, who recently decided to leave behind his dark castle in Transylvania. Now, settled in the 1800’s England, he’s trying to spread the curse that keeps him living beyond death.

By the way, if you like the Universal Monsters, I’m happy to tell you that NetEnt has also made other games featuring the members of said group. There’s the Invisible Man, the deformed Phantom of the Opera, and my personal favourite, the Creature from the Black Lagoon.

The slot starts with a short animated clip. In the dark and narrow streets, A woman runs for her life as a cloud of bats is chasing her. At first, it seems like she manages to slip away but eventually, she is attacked by a mysterious entity.

If you like hefty 3D animations in a slot, then Dracula is your game. Like Gonzo in Gonzo’s Quest, in Dracula, the blood-thirsty count hangs out next to the reels. He hisses furiously at your winnings, and occasionally he turns into a bunch of bats.

I definitely can see the effort NetEnt did with Dracula, but some of the modellings of the characters make me cringe. In another hand, I do like how they animated Dracula when he transforms into bats, even though it makes the spin really slow. What I definitely don’t like is the constant hissing, on every single win. It gets tiring very quickly, so I usually mute this one.

Dracula has five reels, four rows and 40 fixed paylines. The paylines go from left to right, so the winning symbols need to be on adjacent reels. The symbols can appear both single and stacked.

The minimum bet is a 20p per spin, and the maximum is £200. As the game has low volatility it’s a great choice when wagering the bonus money. However, I suggest checking the bonus terms first - just in case the casino has banned playing this particular slot with an active bonus.

Sometimes even the prince of darkness himself gets tired sitting on his throne all day (or night). At those times he loves to turn into a cloud of black bats and fly across the reels. As a result, a random number of a mystery symbols gets added on the reels. The mystery symbol can also be a Wild.

When the stacked symbols of Dracula and the lady are fully visible in reels 2 and 4, it activates 10 free spins. With every spin, the Bat feature adds mystery symbols to the reels.

During the free spins, the stacked Dracula and lady are joined as one on the third reel. They act as a Wild, but they can also give two extra free spins if they’re fully visible.

Dracula is a decent slot to play if you don’t like taking too high risks. It has good RTP and the volatility is low, so while the game probably will not give any extravagant payouts the wins are usually more stable and more frequent than in higher volatility slots.

Even though I’m a huge fan of everything dark and scary, I also love efficiency and speed. And, because NetEnt hasn’t included any options to remove or skip lengthy animations, Dracula is a bit too slow for me. So, even if I do like how the bat feature looks, I hate how it slows down the game speed.

In general, I think NetEnt could’ve done a tad better. Next to the free spins, the bat feature is the only interesting thing and the payouts from free spins are more likely to disappoint than be a pleasant surprise. But, that’s low volatility for you.

Browse casinos with Dracula and other slots from NetEnt. Create an account and try the game for free before making a deposit.

You can play Dracula in English, Finnish, Swedish, German and 20 other languages. 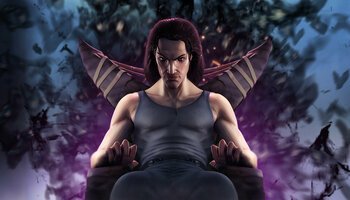