Dragon Born is the first-ever Megaways slot in the world. This slot alone revolutionised game design for years to come.

Big Time Gaming’s Dragon Born Megaways has a place in the annals of history, as the first Megaways slot ever made. This slot doesn’t get too much attention, but it has a mighty legacy. We have seen more and more slots with the Megaways feature and we are not slowing down.

For the first two years, Big Time Gaming was a tiny company with not much going on. This all changed in 2016. The year started with the release of Dragon Born Megaways, which wasn’t the breakthrough point, but rather a necessary step in the right direction. Their big hit came later the same year: Bonanza Megaways.

After the release of Bonanza, BTG quickly realised that Megaways was a big thing. They eventually started to license it to other developers, which was an amazing choice. Developers like NetEnt have been happily paying them for the chance to make Megaways versions of their hit games. This is how we got for example Gonzo’s Quest Megaways and Piggy Riches Megaways.

This slot screams Big Time Gaming from start to finish. The slot has that very distinct 3D-style that BTG has used a lot and that very familiar, yet clunky user-interface.

The game is set in a medieval setting with witches and dragons. Unfortunately, they lack any personality. Every character in the game is just so bland and forgettable. I mean, you could line up some red dragons and I couldn’t tell you which one is from this slot.

That being said, the game does have a uniform look. Everything looks like they belong together and the theme holds it all together.

Surprisingly, the sound design is well done in Dragon Born. The music has that familiar choppy feel unless you play super fast, but at least the music is good. You might actually consider just playing the game with autoplay on, so you can enjoy the tunes. This is a BTG slot that you don’t have to mute.

The symbols of Dragon Born Megaways are a bit more interesting than in your general slot. Yes, they still have those card numbers, but now you get a bit more. As the symbols change in size, so do the images on them.

All of the symbols have different images on them depending on their size, but none more than the six low-tier symbols. They are the card numbers, but as they get bigger, they reveal their true symbol. The letter K may normally just refer to a king, but here you actually get to see that king if you get a large enough symbol.

This game has a surprisingly linear pay structure, apart from one symbol. The dragon is literally ten times more valuable than the next symbol. This might seem interesting at first, but with medium volatility and sub-standard RTP, this means it isn’t that easy to get a decent win.

The special symbols are your key to bigger wins. The diamond scatters can unlock the Free Spin feature, which is pretty nice. What you really want is those giant wilds with multipliers on them. If they are in the right place and especially in multiples, they can instantly blow up the bank.

Dragon Born was the first slot ever with the Megaways feature. This feature changes randomly how many symbols can fit on a single reel at the beginning of each spin. You can get between 2 and 7 symbols and the game calculates how many possible paylines those symbols can then have. You win every possible way, and thus you want to have as many symbols as possible.

The slot has two different kinds of wilds and one of them is a big one, literally. The Full Reel Multiplier Wild is, as the name suggests, a wild that is as tall as the reel. It counts as 7 symbols and can have a multiplier on it. These multipliers actually multiply each other, so having two of the best ones, a 7x multiplier, would mean that you get a whopping 49x multiplier.

Hit enough diamonds and you will get to play for free. Three scatter symbols will get you 6 spins and you can go as high as six diamonds, which are worth 50 free spins. During the feature, every diamond will give you a single extra spin.

Free Spin feature has a little extra treat for you. All these spins are automatically played with the maximum number of symbols on each reel. That means that every spin will have 117 649 paylines available.

Dragon Born Megaways is a historical slot. It is the first-ever Megaways slot, which is a big thing. If you haven’t tried this game yet, I’d suggest you fix that right away.

The game had a lot of potential, but unfortunately, a few bad decisions might have wrecked it. The features, game design and the original ideas were amazing. BTG really nailed those. What they didn’t nail were the prizes.

I found it hard to actually win anything from this slot. The combination of low RTP, medium volatility and top-heavy wins just doesn’t seem to work well together. If they would have just improved on one of these things, the slot would have been so much better. The game isn’t bad by any means, but it could have been great.

Browse casinos with Dragon Born Megaways™ and other slots from Big Time Gaming. Create an account and try the game for free before making a deposit.

You can play Dragon Born Megaways™ in English, Swedish 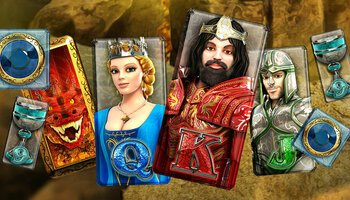