Dragon Kings is a slot that’s based on ancient Chinese myths that were fundamental in this Asian culture. The game features different jackpots, stacked Wilds and special multipliers.

When seeing this slot I found it hard to imagine it was released in 2018 by veteran developer Betsoft, considering the rather bland graphics and the small number of animations. The game looks like it’s been stuck in time for a few years. The symbols are sharp and clear but also pretty unimaginable as they struggle to fill the 10 paylines. It’s not the first game borrowing from Chinese culture and unfortunately, they haven’t looked much farther than the usual gold coins and jade statues.

As always, the slot is steeped in red, from the deep red skyline filling the background to the 5-reel, 3-row playing field again. I’m sure red has some significant meaning for Chinese culture but surely they have other colours there as well. Again, the graphics are fine in regards to detail and sharpness but they lack any originality at all. With the addition of barely designed card letters, the total picture is complete.

If you were expecting some originality in the sound design you’ll actually be surprised. Instead of the usual gongs and flutes, the game actually opted for a more rhythm-based song with keyboards and drums. I have no idea why the developers chose such a generic visual style and then went with a completely original soundtrack but I’m glad they did, so Dragon Kings isn’t completely forgettable.

As I mentioned previously, Dragon Kings make no effort to reimagine any symbols or even delve deeper into Chinese culture to find something that hasn’t been done before. The symbols are also static, meaning they are not animated when part of a win line except for growing in size slightly. Getting a big win will show gold coins dropping down on the screen as the total win is shown.

The game has a moderate number of symbols but with the Dragon King and the Dragons of the 4 Seas, there are 5 different Wild symbols in the game. This brings the slot down to a Medium Volatility.

Although Dragon Kings is in many ways a rather sloppy reinterpretation of things that have been done before, it does add some interesting features that might appeal to some players.

The free spins actually triggered for me quite often, granting me 10 or more free spins to play with. During the Free Spins mode, additional free spins can be triggered as well.

The jackpots are triggered in a multi-step way. There is a 6th reel in Dragon Kings which is only a single tile big and only shows the special Magical Dragon Pearl symbol. To win any jackpot, you at least need the Dragon King symbol on reel 3 and the Magical Dragon Pearl symbol on reel 6. Then, you also need 1 or more of the 4 Dragons of the Seas symbols on the screen. The more differently coloured dragons you have, the bigger the jackpot.

Be aware that there are 4 coloured Dragons of the Seas, and each colour counts as one. If you, for example, get 2 Red Dragons on the screen, they will only count as 1 Dragon. This makes getting a big jackpot very unlikely, but the potential max. win of 280,753x your bet is obviously very enticing.

Dragon Kings has almost nothing to offer in terms of design or setting. The Chinese culture has been ransacked by different slot developers for more than a decade by now and it seems almost impossible for them to inject any kind of originality. The one thing I did like was the soundtrack, using something wholly different to keep some originality alive.

The features are a lot better in that they’re not so standard. I didn’t think they were very well explained during the actual game and I had to delve into the paytable a few times before I understood them. Don’t expect to win any of the jackpots, but I still thought the medium volatility allowed for some big wins here and there.

Players that don’t mind the tired graphical tropes will probably enjoy this slot as it has some solid features and a truly massive maximum win. Choosing a bet between £0.10 and £10 will let you decide the risks you want to take.

Browse casinos with Dragon Kings and other slots from Betsoft. Create an account and try the game for free before making a deposit.

You can play Dragon Kings in English, Finnish, Swedish, German and 22 other languages. 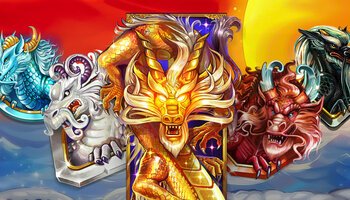