Go East, my son with Dragon & Phoenix from Betsoft. You can’t get more Chinese than the two go-to mythological beasts of the Middle Kingdom: the Dragon and the Phoenix. Where dragons represent power, strength and good luck, the phoenix is considered a portent of harmony.

Asian-themed slots have always been a mainstay of online casino slot catalogues. Will Dragon & Phoenix leave you with a feeling of good fortune or have you closing the game quicker than a grumpy emperor orders the execution of his most prized eunuch? Let’s take a look.

Straight off the bat, it’s evident that the graphics supremos at Betsoft have done their homework when it comes to accurate character design. Players are greeted with a loading screen depicting the male and female leads of Dragon & Phoenix. These two characters are so accurately illustrated, they would definitely get a callback from the casting director of a Chinese period drama.

So named ‘The Royal Couple’, the emperor and empress are modelled on an aesthetic popular in modern-day China. The emperor has a jawline that gives Dwayne Johnson a run for his money and a steely look that would put the wobble in any of the most fearsome Shaolin master’s knees. (For now, let’s skip over the fact that our emperor has blue eyes.)

Our heroine is the picture-perfect ideal of East Asian beauty, complete with a sunflower seed-shaped face and a sultry stare. Pretty sure they didn’t have that smokey eye make up during the dynastic period but we can also let that slide for the sake of creative liberty.

The backdrop to the 5x3 grid is a rendering of a defocussed Forbidden City accompanied by some authentic-sounding zither music. If twinkly classical Chinese instrumentals aren’t your cup of oolong, you’d better hit ‘mute’ as it can get a tad tiresome.

There are eye-busting graphics that you’ll-need-to-put-a pair-of-Raybans-on-for colour palette, sure. But how do the features of Dragon & Phoenix compare? Bestowing players with a minimal offering of Free Spins, Scatters, Wilds and Stacked Wilds, this is quite the “escapist” slot. Dragon and Phoenix is visually-rich but lacking in any kind of features that push the (red) envelope.

Free Spins are triggered for every scatter that appears, up to a maximum of 15 Free Spins while our royal couple represents Wilds.

Feature-wise, Dragon & Phoenix sits alongside similarly themed titles from Betsoft such as Caishen’s Arrival, Bamboo Rush and the Monkey King vehicle, Quest to the West. If you’re a player that values style over features, then this slot will fulfil your desires, otherwise, you’ll be left feeling emptier than a Ming dynasty vase.

There’s also the standard autoplay and quickplay functions available, should you want to hot step to some empirical-themed Chinese slot action.

Much like the political volatility of ancient China, this slot packs high variance with a maximum win potential of 8,098x across 20 paylines. Land 3x money shrub symbols for further wins - who says money doesn’t grow on trees? [Disclaimer: Money really doesn’t grow on trees, so think twice before shimmying up that conifer in your back garden.]

Minimum bets start at £0.2 and maximum bets are topped off at £20. Based on payouts alone, this slot isn’t going to wow anyone used to gargantuan maximum wins from slots. As mentioned before, Dragon & Phoenix is what’s more of an ‘experience’ slot. Players looking for massive win potential would be advised to check out titles such as Dead or Alive or Mythic Maiden.

Easy on the Eyes, Measly on the Features

Dragon & Phoenix isn’t a bad slot by any means. Stylistically, it delivers with some pretty authentic design elements and nicely illustrated symbols. More attention could have been given to the hues which come across as a bit on the cheap side, and not something that befits such elegant rulers.

Props to not falling into the trap of splashing the frame in the colour of Chinese prosperity: red. It tends to bleed on screen, looks kind of mucky and generally a bit on the tacky side. Visually, Dragon & Phoenix is a step above most Asian-themed slots, with attention to detail given some real thought and solid research chucked in to give the game an overall authentic feel.

The gameplay itself is nothing majestic and the lack of features will dissuade most serious slot players from kowtowing to Dragon & Phoenix. Not a bad game by any means but it’s also not one that’s going to hold court with the vast majority of experienced players.

Browse casinos with Dragon & Phoenix and other slots from Betsoft. Create an account and try the game for free before making a deposit.

You can play Dragon & Phoenix in English, Finnish, Swedish, German and 22 other languages. 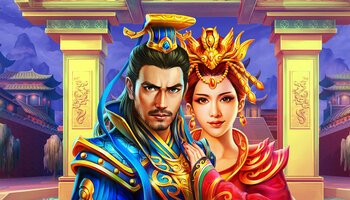