Dragon’s Fire InfiniReels is a game that brings us to the fiery place where a number of dragons reside and live their lives. The slot has a number of interesting features as well as appropriate graphics, showing us expanding reels, wilds and free spins set in the nest of dragons.

The slot was originally developed by studio Red Tiger and released in 2021, making it one of their latest releases. The game is built around a 3-reel, 3-row playing field that can expand to the right infinitely, adding an extra reel whenever there is a win. This is also where the game got its name. When starting a spin, the game has 27 paylines but this can increase as the playing field gets bigger up to a maximum of 9,999 paylines.

As for its presentation, the game doesn’t go out of its way to do anything exceptionally original but the graphics are all uniquely made for the game. In the background, we can see dragons slither around as well as what appears to be a mountain. The reels seem to be projected onto the nest where the dragons live. All of the symbols are uniquely created for the game, making sure the immersion isn’t broken.

The symbols are all hand-drawn and offer a good amount of detail. When they’re a part of a win they’ll also show off their animations. Getting a win will expand the playing field, shifting everything to the left as a new reel is added to the right. This is all done in a fluent motion which again helps keep the player feeling immersed.

Dragon’s Fire Infinireels offers players a look at a number of original symbols drawn to fit the dragon theme. These are quite similar in appearance, especially since red, gold and black are very dominant colours in this game. The eye is mostly drawn to the different shapes to help differentiate them and that worked quite well.

Since the game uses quite a lot of different symbols and there is only limited space on the playing field, there is High Volatility players will have to deal with. I found that getting 2 or 3 wins in a row was definitely possible, but any more became very unlikely. To handle the volatility it’s possible to change your bet to somewhere between £0.10 and £10 per spin.

On the other hand, the game offers a max. win of 10,000x your bet to keep you interested in playing. This is obviously quite a big jackpot even compared to other slots with similar volatility. Then again, I don’t think a lot of players will ever get close to this and it is only intended as a lure for power players.

The game has a collection of symbols present, below a quick overview of them from most to least important:

Obviously, the payouts are very low and are max. three-of-a-kind long. When there is a win on a longer payline, the initial win value will be added for each additional reel in the win.

Dragon’s Fire InfiniReels has only a small number of features to augment the gameplay, besides the obvious one. The features found in the game are listed below:

Getting the reels to expand is not something that happens every spin but it does trigger frequently. Obviously, the main problem here is that they only rarely add more than 1 or 2 extra reels before resetting when there are no more wins. Something to mention here is that even when you get an extra reel, you still have to pay for that spin as normal. There is no re-spin functionality here.

When getting a win, the coins are immediately added to your funds before the next reel is added. Then the cost for that spin is detracted from your funds and the new spin triggers. As a result, you will need to keep winning to even keep your funds stable. With the lowest-paying symbol, for example, you will require almost ten wins in a row to even win back half of the spins.

As a result, I found my funds to drop rather quickly and I never felt like I had a shot at winning things back. The volatility is very much hidden in the base game and does not really come into play during the free spins mode. You will need to get your big wins from getting dozens of wins in a row during the base game, which will be near to impossible.

Dragon’s Fire InfiniReels is a slot with a strong sense of identity and design. The developers put a lot of attention to detail in the creation of the slot’s appearance. I couldn’t really find much to complain about, except perhaps the rather dark colours which made it sometimes difficult to distinguish different symbols.

The game is probably not very interesting for people that enjoy regular wins or a shot at keeping their funds stable. This is a slot where the volatility is keenly felt. Winning is not enough to get your initial bet back, while the infinireels mechanic doesn’t feel like it pays off nearly enough.

If you’re someone who enjoys the thrill of the risk this slot brings, or you are a high roller that doesn’t have to worry too much about playing for a long time the jackpot might be appealing. For everyone else, I wouldn’t spend too much time with this game.

Browse casinos with Dragon's Fire INFINIREELS and other slots from Red Tiger. Create an account and try the game for free before making a deposit.

You can play Dragon's Fire INFINIREELS in English, Finnish, Swedish, German and 22 other languages. 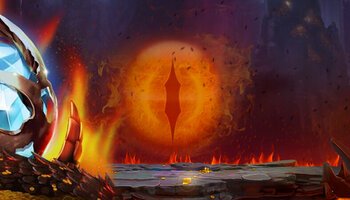