Dragon’s Fire brings us deep into the lair of a dragon where it is hoarding its gold and eggs, surrounded by fire. The game boasts a free spins mode, multipliers and stacked wilds to keep us interested.

Developed by Red Tiger and released in 2018, Dragon’s Fire takes the concept of a dragon’s lair and built a slot around it. Where most dragons in slots are based on the Asian design this one takes a more Western approach, reminding me of Smaug from The Hobbit. This is enforced by the symbol that resembles the Eye of Sauron.

The slot has a 5-reel, 4-row playing field and 40 paylines filled with different kinds of unique symbols. I found everything to look very nice with the background showing a sleeping dragon and mountains of gold on one side, and a glowing egg with a multiplier on the other side.

I thought the symbols were very pretty, each of them unique and easily distinguishable because of the different colours. There are roughly two types, the young dragon and the egg. The shape here also helped in setting them apart. There are also quite a few animations when there is a winning payline, and the screen is doused in a fire when there’s a big win.

The symbols in this slot are all original which helped the vibe of the game. I always appreciate it when the developers took the time to add something unique, as I find the different card suits to be very distracting and diminishing the setting of the game.

There are a few different features in the slot that are integrated well with the setting. Most are introduced through a quick animation. The multiplier function douses the screen in flames for example, and the free spins mode has the dragon fly across the screen.

The features won’t be unfamiliar to most people and their implementation is also what you’d expect. Due to the game’s High Volatility, the features are more important to get some big wins and in my experience, they did facilitate that.

The Wilds appear often enough to be interesting but aren’t often placed correctly to create more than 1 or 2 wins. The Stacked Wild in contrast was a lot more beneficial during my time playing. Especially when they appeared on reels 1 and 3 there would be at least 5 winning paylines. This, coupled with the sizeable payout would give a much-needed boost to my funds.

Players can select a bet between £0.10 and £10 which isn’t as much choice as you’d find in most other games. It’s probably for the best though, since even with such a limited selection I found it to be easy to pick a bet that was too high. With a £10 bet per spin, the volatility would only award wins very occasionally which meant my funds drained quickly. I would strongly suggest that you only play with smaller bets.

The Free Spins mode triggered often enough to be a positive influence on the game. It triggers whenever there are 3 symbols on the screen after which the player is given the choice between 3 chests, each containing a random number of spins. After this, the mode itself starts.

Dragon’s Fire is a very pretty slot with a lot of animations and beautiful graphics. There is a lot of colour with hues of deep yellow because of the fires and gold that are outside of view. It also plays very nicely, with not much expected of the player apart from spinning the reels and selecting a free spins chest.

The high volatility could be especially punishing because of the high number of symbols and the larger playing field than usual. This meant there was a greater reliance on special features. Although they did appear quite often, I couldn’t count on them and it was important to adjust my bet as it went. The potential of a max. win of 10,000x your bet was very appealing, however.

I think most players will enjoy this slot if they can live with the volatility. It’s not a slot that you can put on autospin and do something else. It’s important to keep a close eye on your funds. That said, the game does sometimes award massive wins and that’s what keeps it exciting.

Browse casinos with Dragon's Fire and other slots from Red Tiger. Create an account and try the game for free before making a deposit.

You can play Dragon's Fire in English, Finnish, Swedish, German and 18 other languages. 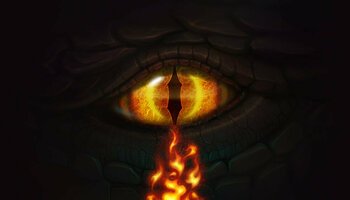