Dragon’s Luck Power Reels is a variation of the classic Dragon’s Luck that was released a few years before, replacing the standard playing field with a much bigger one and introducing the pays both ways feature to further enable wins.

This version of the Dragon’s Luck slot was released in 2018, obviously also by the original creator Red Tiger. The developer adjusted some elements of the game while keeping much of the appearance the same. That means there isn’t really a lot to say concerning its looks that weren’t already addressed in the original review. The game looks fine even with its massive 10-reel, 6-row playing field with a total of 30 paylines.

With a huge playing field, only 3 paylines and a large number of symbols the game still comes with a High Volatility. It is not easy getting wins but when they do happen, they’re likely to be quite substantial. The game has no bonus game or free spins, so all of the action is contained on the base game. The use of colossal symbols and the pays both ways mechanic are supposed to be enough to balance things out.

I don’t feel comfortable commending the game for its look and feel since it so closely resembles the original it is based on. It looks fine and if this is the first Dragon’s Luck you’ve played you won’t be disappointed but players that are familiar with the regular one won’t find much new here. The music is similar to the original as well, making the game feel like a quick and easy update to the old game.

The massive playing field obviously needs a lot of symbols to fill it up and the Red Tiger developers did not shy away from their responsibility. The symbols all look distinct from each other even as they’re shrunk down to fit the reels. It’s easy to see different wins as the game lights them up for your convenience anyway.

The symbols go from high to low:

As can be expected, the max. win of each symbol is massive but we also need to be realistic and consider it is very unlikely a player will ever get a ten-of-a-kind win of even the lowest symbol. There aren’t enough features to really facilitate this, as the game doesn’t even have a Wild symbol. Still, the max. win of 3,888x your bet does not require any special feature to activate, the player only has to get the top-paying symbol on a ten-of-a-kind win line.

Dragon’s Luck Power Reels does not have a lot of features but the ones that are present are at least interesting:

The most interesting feature is probably the multiple wins on a payline. This one works by having a symbol appear on consecutive reels starting at reel 1 or 10, which can then be added on by another symbol.

For example, an Ace appears on reels 1, 2 and 3 on a win line. On reel 4, 5 and 6 there are Koy symbols on the win line. The game will then count both of these three-of-a-kind streaks as a win. It didn’t happen a lot and I had to read the paytable to understand what it meant, but it does marginally increase the likelihood of a win. Of course, even if an entire win line is filled this way it will not pay out a ten-of-a-kind win.

The Colossal Symbols were rare and often added low-paying symbols to the game, but they could easily help in creating longer bet lines which would result in bigger payouts.

Players are able to pick a bet between £0.10 and £20 per spin, but considering the high volatility, I would caution against betting too high. During my time playing, I found that the time between wins could be considerable and even when there was a win, there was no guarantee they’d be big enough to make back the coins spent on spinning that far.

Dragon’s Luck Power Reels is in many ways an updated version of the original Dragon’s Luck. The much bigger playing field changes the gameplay somewhat but I didn’t feel like it was more exciting. The features that are included mostly work in the background, resulting in wins in almost arbitrary ways. The wins that did trigger were usually not big enough to justify the time playing. The game looks fine, the symbols are still distinct enough even though they’re only half the size of the original. The background is also nice to look at, even though it’s a direct copy of the original slot. I liked how the two dragons on either side of the frame would breathe fire when there was a big win.

Is the game good enough to play? It doesn’t do anything wrong, but it also does not leave a lasting impression. Some players who really enjoyed Dragon’s Luck might give it a try to see if it adds anything new, but I doubt most people will have any kind of reaction to it.

Browse casinos with Dragon's Luck Power Reels and other slots from Red Tiger. Create an account and try the game for free before making a deposit.

You can play Dragon's Luck Power Reels in English, Finnish, Swedish, German and 18 other languages. 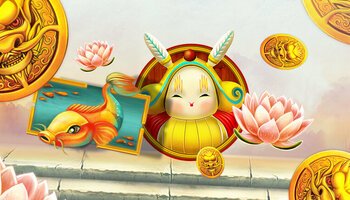