Dragon Shrine is a simple, abstract slot that draws some inspiration from Asian culture to fill the reels with symbols. Its main draws are the non-standard playing field and the pays both ways feature during the free spins mode.

It seemed Quickspin didn’t have too much time to work on their slots when they released Dragon Shrine in 2016, because the game is very simple in its design. The game has a non-standard playing field with reels 1 and 5 having 3 rows, while reels 2, 3 and 4 having 4 rows. The slot has a total of 40 paylines that count both ways in the free spins mode.

The game lacks any sense of style or setting in my opinion, bar 2 or 3 symbols that are somewhat related to the name of the slot. Most of the symbols are either coloured gems or card letters. There is no background to speak of either, making it set in nothing. It’s very colourful and the images are sharp but it’s not a slot that makes any effort to be memorable when it comes to the graphics.

I thought the music was not much better. During the base game, there is a very soft Asian theme playing. Wins are punctuated by classic electronic jingles. When the re-spins or free spins mode are triggered the music does pick up a bit but at that point, it’s too late to really set the mood.

As I mentioned previously, the symbols in the game are very simple and not original except for the special symbols. The colours are bright which helps in keeping the tiles apart. When there’s a win, the win line is simply lit up and not much else happens. Occasionally the special dragon symbol shows up which has a little more movement as it is cloned across the screen but there are still no special animations. A big win is celebrated with a brief splash screen on top of the reels but not much more.

As you can tell the payouts are extremely low even for five-of-a-kind wins. Through the game’s features, a single payline is rare but even so, there are not a lot of wins during the base game. It is very dependent on these features to activate in order for the player to get a big enough win to make back their bets. Still, the features appear frequently enough to keep it on a Medium Volatility, rewarding players often enough to make things interesting.

While I played, I found the game to have periods of time where there were zero wins and then a sudden spike in successful bets that boosted my funds up enough to continue playing. Players get to pick a bet between £0.20 and £80 per spin which makes it possible for an individual to choose how risky they want to be. I would advise spreading your funds out over a longer period of time since the wins are infrequent enough that it can stop your game if you bet too high.

There aren’t a lot of features in Dragon Shrine but because of the strange shape of the reels, they offer an extra dimension.

The non-standard reels have a special function in that they make a re-spin more likely. Instead of having to fill 4 rows reel 1 and 5 are only 3 rows, making it easier to get a stacked reel. Once this happens, re-spins are triggered that make Dragon and Wild Symbols sticky. At the end of the re-spins, the wins are calculated. This would almost always result in a big win while I played and was an important part of keeping my funds stable.

The Wilds show up regularly enough to be interesting but only really contributed to getting wins during the re-spins portion of the game. A single payline is simply not enough to make back your bet.

The Free Spins activated rather frequently, giving the game a tendency to switch between re-spins and free spins regularly. This was important to keep the volatility at its level since the base game offers very little wins. Once the Free Spins activated I received 10 free spins. During this mode, the paylines count both ways. On its own, that did very little to get any wins.

However, during the Free Spins mode, the Re-Spins activate when there are stacked Dragon symbols on either reel 1 or 5. Once that happens, the stacked reel is copied to the other side, so both reel 1 and 5 are filled with Dragon symbols. After this, the re-spins start that will add Dragon and Wild symbols to the screen.

Couple that with the fact that the win lines are counted from left to right and vice versa and you can see how this will increase the size of the wins significantly. Free Spins were an excellent way to increase my funds, but it did hinge on triggering the re-spins. Without those, the Free Spins mode was rather ineffectual.

Although the game doesn’t look like much it does have a strong gameplay basis on which it builds. The graphics are rather stale and simple but they do the job of making it look modern enough. The music was very similar in a way, offering something because it is expected and not really because it adds anything.

The gameplay makes up for a lot. The non-standard playing field might be a turn-off for some players but I found it to be of little consequence. The only downside to the different features is that the base game doesn’t feel very important. I was mostly playing from re-spins to free spins mode and not interested in the base game at all since it was so sparse in granting me wins. It also made it more disappointing when a special feature triggered and I didn’t get a big win.

The game is perfect for people that enjoy a game with spaced out bigger wins, without going too far in either direction. The wins are big but not too big while the time in between wins is long but not too long. I also found the features to be reasonably reliable in granting a win, which made it less stressful to play. Keep in mind that the max. win is only 871x your bet so don’t expect a jackpot that will instantly let you retire!

Browse casinos with Dragon Shrine and other slots from Quickspin. Create an account and try the game for free before making a deposit.

You can play Dragon Shrine in English, Finnish, Swedish, German and 4 other languages. 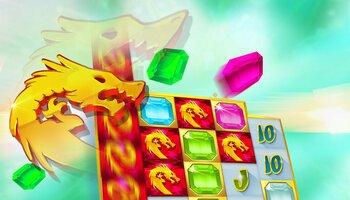