You really don't want to mess with any sword-wielding, dragon-training sisters unless they are part of a high-variance slot game that can pay up to 1,258x your bet. That game is, of course, the gem in the rough called Dragon Sisters and comes from Push Gaming. This company is notable for releasing several games with big win-triggering ability and by all looks, the game at hand is one of those.

I liked the title and decided to check out what it's about. The first obvious thing about the game is the two different reel sets. Both have a layout of 3x5 and can pay across 25 ways to win, which makes Dragon Sisters appealing from the start.

The set of features that can give the base game a good jolt is all about the dragons. One breathes fire, the other ice and they seem to belong exclusively to its respective reel set and probably to either one of the opposing factions in this dragon-herding kingdom.

I found the bonus feature to be a potential starting point for a multi-phased string of events that can wrang the random number generator of big and epic wins. You can feel that the high variance shows throughout the gameplay, building up for a moment in the life of the dragons making Dragon Sisters a well-rounded gaming experience.

Just a number of spins in makes it obvious that you can derive a story of an epic battle between the two sisters and their dragons. The symbols help trace out the objects that are at play in the story and the graphics engine helps to bring the best of the design features.

Needless to say, I like the graphic design throughout. The symbols are well-drawn examples of swords, spears, dragon shields, royal crowns and two pretty protagonists. The background is there too - a towering castle perched on precipitous crags, all of it pretty drawn and creating depth.

The sound design is quite refreshing also. I like it that it is not a repeating theme but layers of sounds that are interrupted by a thundering sound effect in case of a winning outcome or by a wild guitar solo if your hand is graced by a big or epic win.

The paytable looks sensible to me, but I don't think it's fairly generous. To an extent it is, but only regarding the three top-paying symbols - the Dragon Sisters and the Wild. Three, four or five of the same kind on a payline can pay 2x, 5x and 15x in that order and strangely enough, I got to see an impressive frequency of full stacks of the sisters' symbols.

The remaining high-paying symbols (the royal crown and items from the arsenal) can trigger winning outcomes between 0.6x and 5x your bet. Not too good, not too terrible. And lastly, the five strange puffs that appear to be some kind of a Scooby snack for dragons, can pay between 0.08x and 1x your bet. Worth pointing out that symbol combinations of three and four of the same kind pay extremely low amounts.

So, that takes me to my conclusion regarding the payouts in Dragon Sisters. This is a high variance game and it can also pay a good maximum, but the math model was keen on unnerving me thanks to a good share of low strikes.

Despite some of the details above, we can’t overlook the fact that the bonus feature is just awesome and that symbols can appear in stacks and the battle between the dragons can amount to fun times and good payout potential. I enjoyed the game thoroughly and I was able to land a number of good wins. I didn't 'beat' the house, but it paid well to see the dragons battle it out.

Browse casinos with Dragon Sisters and other slots from Push Gaming. Create an account and try the game for free before making a deposit.

You can play Dragon Sisters in English, Finnish, Swedish, German and 16 other languages. 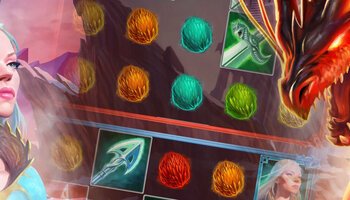